LAHORE - Fans of Waqar Zaka went into total shock when one of the statuses on his account claimed that the account had been hacked and threatened to 'expose' the celebrity.

Waqar Zaka gained media attention last month when a video showing him being thrashed was accused by the hackers of 'pulling off' a publicity stunt went viral on social media. 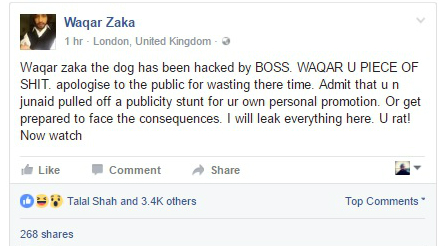 A video of a woman was also posted claiming that Waqar Zaka lied to his fans about his fight with Junaid.

Last month, a video of a man beating Waqar Zaka, renowned Pakistani celebrity outside a café in Clifton, Karachi went viral on the Internet.

Zaka, in the video, was heard to be saying, “Boss, mene apko bola kia hai?”

The phrase had gone viral on the Internet, becoming the subject of many memes and jokes.