When a company published Pakistani map without Kashmir, this is how Pakistanis reacted 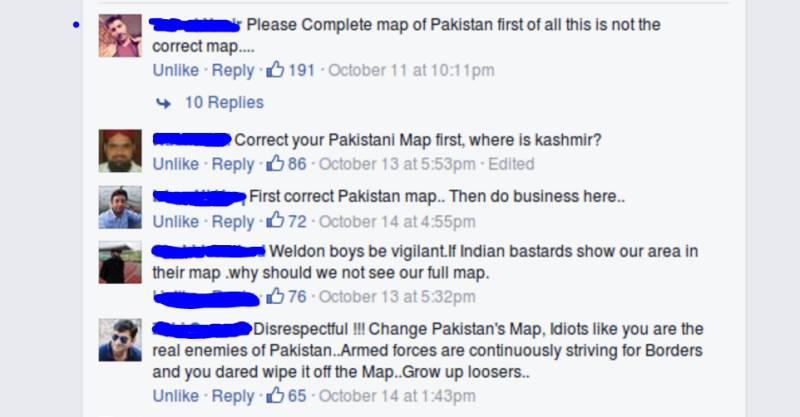 LAHORE (Staff Report) - As the founder of Pakistan Muhammad Ali Jinnah categorically stated that Kashmir is jugular vein of Pakistan, Kashmir has always been a matter of concern for Pakistanis and they react to every single thing that separates Kashmir from Pakistan.

The same happened when an internet service provider company published an advertisement on facebook carrying a map of Pakistan without Kashmir.

The post triggered anger among Pakistani users who demanded the company to first publish complete map of Pakistan and then start doing business here. Many users announced to boycott the services being provided by the company until it places complete of Pakistan with Kashmir shown as its part.

"I am not even going to like your page until you publish correct map of Pakistan," said a user who maintains his identity as Tanvir S. Ansari on facebook.

Earlier this year an alike reaction was noted when a news channel Geo News displayed a map of Pakistan with out Kashmir in one of its prime time show. However the news channel tendered an unconditional apology after realising its mistake, promising that correct Pakistani map would be used in future.

But in this case, despite all the reaction from Pakistanis YahClick, which provides internet and broadband services in over 28 countries worldwide, has not replaced the map of Pakistan so far.