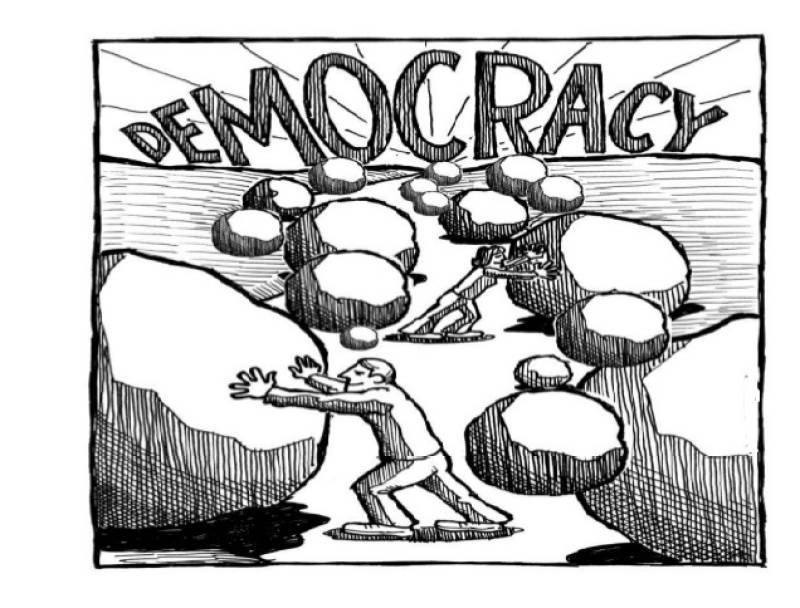 Democracy and Pakistan do not seem to be getting along. A system of governance by the people for the people has continuously been shown the door in Pakistan’s 70-year history. The strongest opposition against democracy has always been attributed to the establishment. However, those under the veil of a democratic mandate seem to be backstabbing it as well. The recent stunts by Nawaz Sharif and Imran Khan add to their past adventures to derail democracy.

To begin with, Pakistan had a very short romance with democracy. Ironically the formation of Pakistan was a result of a true democratic consensus in the form of the Lahore Resolution. Unfortunately, soon after independence, undemocratic forces sprang into action. We lost our Quaid-i-Azam, followed by the tragic assassination of Pakistan’s first Prime Minister. A list of Prime Ministers and Cabinets followed, but they were widely believed to be puppets controlled by the establishment. The charade was officially over when Ayub Khan imposed the country’s first Martial Law which lasted for a dozen years. It was only Shaheed Zulfiqar Ali Bhutto’s charismatic leadership that finally resulted in power returning to the people and Pakistan’s first elected government came into being. This managed to give each citizen a sense of ownership of the country and a feeling of belonging.

Another key breakthrough of this democratic era was the 1973 constitution that ensured a parliamentary form of governance truly representative of the people. Regrettably, another dictator in the form of Zia ul Haq initiated another decade of martial law. The country’s first elected Prime Minister was judicially murdered and Pakistan’s first constitution was suspended.

Zia’s era is regarded as the darkest for democracy. There was a blanket ban on all political activities, severe restrictions on media and freedom of speech along with grim human rights violations. A sham government was introduced in 1985 and spawns of dictators such as Nawaz Sharif was born. In the meantime, authentic politicians and political workers including Shaheed Benazir Bhutto faced persecution. It was only fate and divine help that managed to rid the country of Zia and the people of Pakistan reelected PPP and brought back a Bhutto as their head of government.

But, just like clockwork, democracy was once again put on the ventilator and another era of Martial Law was imposed by Pervez Musharraf. After the tragic assassination of Shaheed Benazir Bhutto, democracy was given another chance. The PPP restored the constitution and further introduced the 18th amendment to ensure that a parliamentary form of government runs the country, reducing the threat of schemes against democracy.

Ironically, the biggest threat against democracy currently comes from apparently democratic leaders. Imran Khan has since long been considered a tool of the establishment. He has regularly referred to a “Third Umpire” raising his finger and ousting the parliament. This week though, he further exposed himself by joining hands with Maulana Sami ul Haq who is also referred to as the “Father of Taliban.” It seems that Imran Khan will go to all lengths to try and seize power even at the cost of democracy.

Similarly, Nawaz Sharif in 2017 is also a major threat to democracy in Pakistan. The Dawn Leaks episode along with Panama Leaks has turned him into a megalomaniac with complete disregard to the true spirit of democracy.

Instead of graciously accepting the Supreme Court decision he is bent upon conflict amongst the country’s institutions and is giving space to anti-democratic forces to once again take over. His recent Election Reforms Bill 2017 is perhaps the best example for this. He made changes to the constitution to safeguard himself as opposed to the larger interests of the country. In his world, a thief and a criminal can be head of a political party and even Prime Minister. What a sad day for democracy!

The recent effort by Pakistan Peoples’ Party to revoke the Election Reforms Bill 2017 seems to be a silver lining. Continued efforts must be made to ensure the Supremacy of the Constitution. The role of the parliament as a body of consensus must be highlighted and the mandate of the people must be respected. This means that parliament is above any individual or any family. The blue-eyed boys of dictators, such as Nawaz Sharif, must be kept out and opportunity must be given to a new generation of untainted leaders such as Bilawal Bhutto Zardari. The only hope for Pakistan is that the cycle of democracy continues and the people get to choose who serves them.