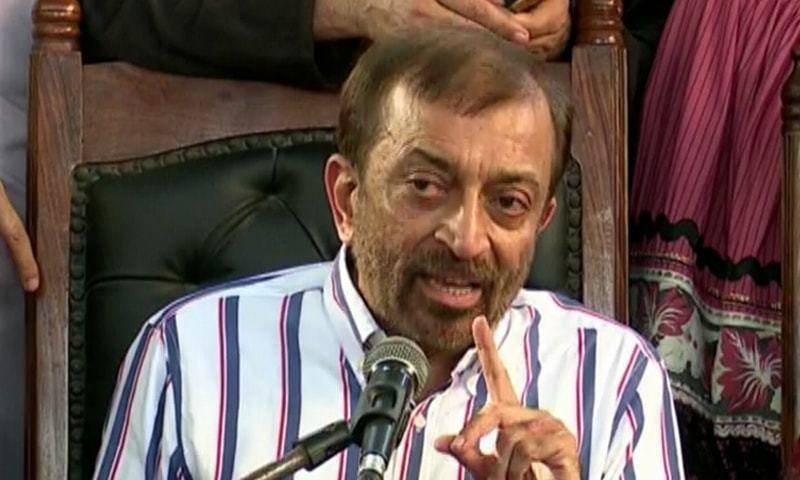 KARACHI (Web Desk) - The Muttahida Qaumi Movement (MQM) leader Farooq Sattar has announced that he will be assuming control of the party leadership.

He said MQM has also distanced itself from anti-Pakistan statements made from party offices in London.

While addressing a live press conference, Sattar announced that future decisions will be made by the MQM Rabita Committee in Pakistan.

Sattar accepted that “there is a problem” and that Hussain’s frequent apologies after incendiary statements is an issue that needs to be resolved. The press conference was held a day after protesters, alleged to be MQM workers, attacked the office of ARY News.

“The MQM should operate from Pakistan alone,” Sattar said.

Referring to Hussain’s apology statement issued earlier today, Sattar said: "If such statements are a result of mental stress, then that mental stress needs to be resolved first. It would be better for MQM to operate from Pakistan until Altaf Hussain's health issues are not resolved, as such statements push MQM into confinement.

The leader also chanted pro-Pakistan slogans along with journalists at press club.

Sattar in his speech expressed disappointment at the anti-Pakistan slogans that were chanted in an address by the MQM cheif on Monday. “Such statements should not have been chanted,” he said.

Please give us the chance to tell you what our heart says, Sattar said.

“Whether it is a worker or the leader of the party, the MQM will not allow this to happen again. This was wrong and it should not have happened. And our leader also apologized,” he said.

“So we have also made another decision. We have decided that if there is any mental stress. It is needed that this problem is also addressed.”

“I pleaded the paramilitary Rangers force to give us the opportunity to speak our heart. Some may feel that we may have been influenced by the eight-hour detention or any fear or pressure,” he said.

“Whatever happened today shouldn’t have happened?

“When we were sitting here yesterday, we had no idea what was coming next.

“Muttahida Qaumi Movement (MQM) wants to do politics in Pakistan. I assure all of you that every MQM worker strongly denounces the speeches made yesterday. It is our stated policy from day one.

“MQM dissociates itself from yesterday’s speeches, strongly condemn it and regret the hurt it caused to the people of Pakistan.

“We strongly condemn the incitement to violence. We categorically denounce it as word torture is not part of MQM’s dictionary,” he said.

“As a matter of policy, we strongly denounce whoever was involved in yesterday’s violence.

“I pledge and take this responsibility that MQM will never let anyone repeat such actions.”

In his statement, MQM chief Altaf Hussain also said that he was ashamed of his speech.

“We emphasize that there was also need to operate the MQM from Pakistan.

“We have unflinching association with Pakistan and it dates back to the partition of Pakistan,” he said.

“Our commitment is with Pakistan even before the establishment of Pakistan.”

“The Rabita Committee has decided that sanity must prevail that there was need to damage control.

“We have decided that we cannot afford such things from the platform of MQM.

Sattar maintained that it was not the policy of the MQM to attack media houses as he condemned what took place on Monday.

“I respect Quaid-e-tehreek Altaf Hussain. The result is that the political gains that we had achieved, all of Pakistan had begun to realize that we had some valid reasons, but with only one mistake you are yourself ridiculed and all the party and its voters and supporters are also ridiculed,” he said.

“If this thing is recurring time and again, we have decided, with Rabita committee also part of it…that sanity needs to prevail, and that damage control needs to be taken. Our decision, wish, our advice is that this cannot be repeated from the MQM platform,” he added.

The senior leader is addressing an important press conference at the Karachi Press Club.

Earlier today, Sattar was released from Rangers custody after an overnight detention. Sattar was detained along with nine other MQM leaders on Monday night at KPC after party workers attacked media houses following Altaf Hussain’s inflammatory speech. At least one person was killed and over half a dozen injured as MQM workers and police clashed.