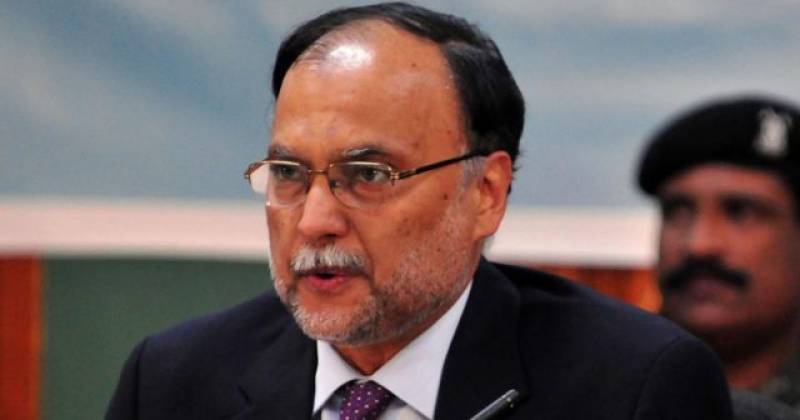 According to NAB spokesman, the Pakistan Muslim League-Nawaz (PML-N) leader will be presented before an accountability court on Tuesday for physical remand while his medical check-up will be done today.

The NAB Rawalpindi chapter had summoned the PML-N leader in relation to the case.

Earlier today, Ahsan Iqbal maintained his innocence in the case, which is related to mega corruption in the project in Iqbal's home constituency.

Addressing media persons in Islamabad, he said that the PTI government has failed to deliver and destroyed the economy of the country. He maintained that the PML-N will rescue the country out of the crisis.

He also lashed out at the Imran Khan-led government for "using NAB for character assassination of PML-N leaders".

"Those who are raising voice over the government's bad policies are being made silent."

Regarding Narowal Sports City, Iqbal said that Rs2.5 billion were spent on construction of the project. “How can I commit corruption of Rs6 billion when the cost of the project is low?"

ISLAMABAD - Abid Hussain, the shooter who opened fire at the former interior minister Ahsan Iqbal, was sentenced to 27 ...

Iqbal, who was inducted as interior minister to ex-PM Shahid Khaqan Abbasi's cabinet last year, is a staunch supporter of Nawaz Sharif and the former ruling party (PMLN). He also headed the Ministry of Planning, Development and Reforms during the previous government.