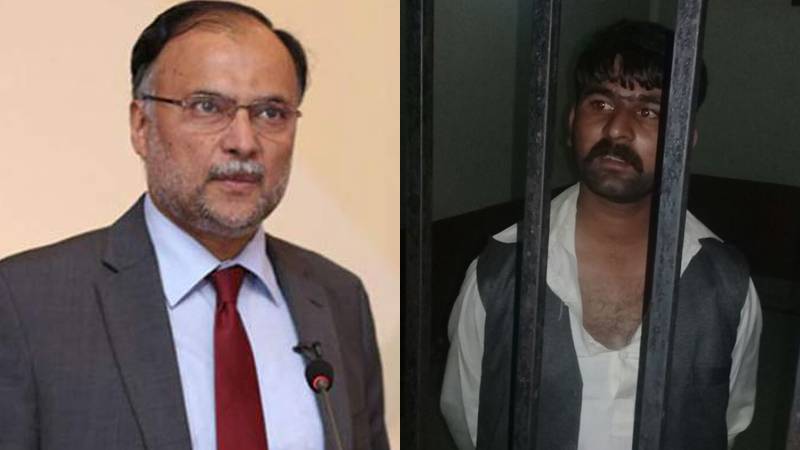 ISLAMABAD - Abid Hussain, the shooter who opened fire at the former interior minister Ahsan Iqbal, was sentenced to 27 years in prison for targeting the politician.

The judge of a special court, Ali Imran, announced the sentence on Saturday and imposed a fine of Rs 190,000 on the convict. The court also announced a separate jail term of three years for possessing and utilizing illegal weapon.

The judge, however, ordered to release four accomplices.

Iqbal, who belongs to the ruling Pakistan Muslim League (PML-N), suffered a bullet wound in his right arm when Abid Hussain opened fire on him in Kanjrur area of Shakargarh, in May.

The attacker used a 30-bore pistol to fire at Iqbal from a distance of around 20 yards and the politician was immediately shifted to a nearby hospital in Narowal.

A preliminary report sent by the deputy commissioner of Narowal to Punjab chief secretary revealed the attacker who fired shots at the minister has “showed his affiliation with Tahrik-e-Labbaik,” a religio-political party led by Khadam Hussain Rizvi, who staged the violent protests against the government following amendment to Khatam-e-Nabuwwat Declaration in Election Act, 2017.

The agitation led to the ouster of then law minister Zahid Hamid, while it came to an end after the government and the TLP reached an agreement brokered by the army.

The report further said, “…lqbal finished his corner meeting at village Kanjroor at about 6:00 pm when a man took advantage of the rush gathered around the minister and fired a bullet with 30 bore pistol which passed his right arm and went straight into groin area”.