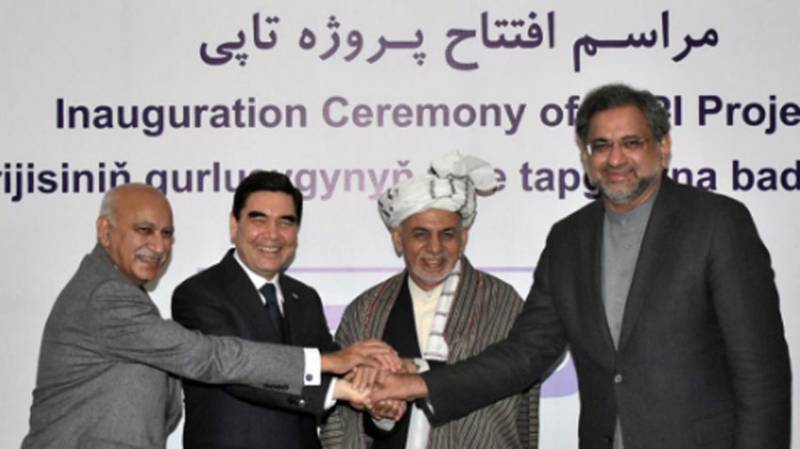 He said Pakistan has been able to overcome its challenges and is on the path of economic progress. It will achieve six percent growth this year and CPEC would provide most efficient connectivity to the region.

Shahid Khaqan Abbasi said Pakistan has added 10,000 megawatts of power in the last four years. By the end of next year, Pakistan would be adding 2500 kilometres of six-lane motorways to provide connectivity in the region.

The Prime Minister also congratulated the Asian Development Bank (ADB) for its role in making the project a reality. He assured the leaders of Turkmenistan, Afghanistan and India, Pakistan's full cooperation in making TAPI a success.

Afghan President Ashraf Ghani in his address said Afghanistan will leave no stone unturned to implement the project.

He said today Herat gives the message of confidence, hope and rehabilitation to Afghanistan and the region.

Ashraf Ghani said this project is the start of trust in Afghanistan. The project will improve regional cooperation and will move us from poverty to prosperity.

Turkmenistan President meanwhile stressed the need for increasing his country’s cooperation with Afghanistan.

He said the implementation of the TAPI project is the biggest achievement for the countries involved and it has a good impact on Afghanistan’s security and economy.

India's Minister of State External Affairs at the event said his country is committed to supporting the project.

Earlier, a ceremony on completion of Turkmenistan section of TAPI pipeline project was held at Turkmen city of Serhetabad.

An agreement on Turkmenistan-Afghanistan-Pakistan power line was also signed on the occasion.

A Pakistani cultural troupe performed at the occasion along with their counterparts from partner TAPI countries.