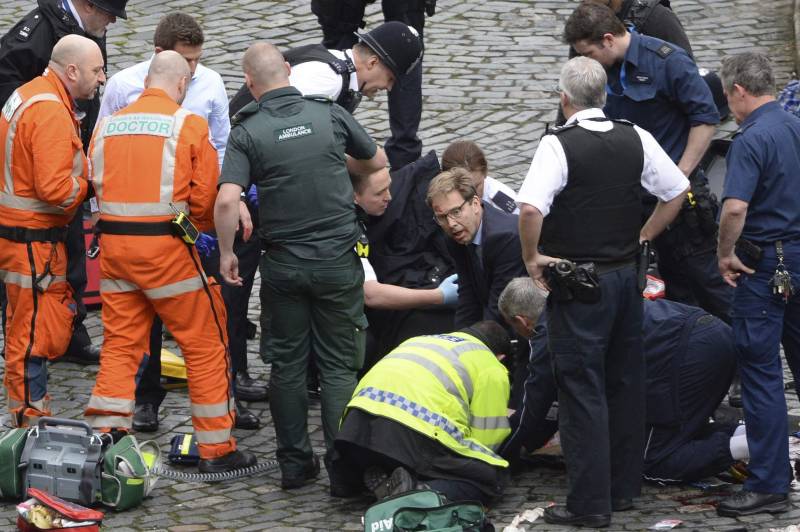 LONDON -  At least five people were killed in a suspected terrorist attack outside the British parliament, by an attacker who was shot dead by armed police, here on Wednesday.

According to Britain's top anti-terror officer Mark Rowley, three civilians were killed on Westminster Bridge after the attacker mowed down pedestrians in a car. A police officer was also left dead in the incident that shocked the international community.

Apart from the casualties, the severity of the attack could be gauged from the fact that the incident left 40 people injured as well.

According to eyewitnesses, the attacker rammed into pedestrians on the Westminster Bridge and then crashed his car into railings outside the Houses of Parliament. He then ran out with a knife and stabbed an on-duty police officer.

The House of Commons, which was in session at the time was immediately suspended and lawmakers were asked to stay inside, as law enforcers sealed off the area.

The assailant is said to be of Asian origin and in his early 40s. However, there is no official word from police on the identity of the attacker yet. After the incident, a terror alert was issued in the entire country.

British premier, Theresa may condemned the incident and termed it 'sick and depraved'.

'The location of this attack was no accident' she said in a statement issued after an emergency cabinet meeting.

On the other hand, London Mayor Sadiq Khan said there would be additional police officers on the city streets to keep Londoners and visitors safe.

"We stand together in the face of those who seek to harm us and destroy our way of life," he said, "we always have, and we always will. Londoners will never be cowed by terrorism," he said.