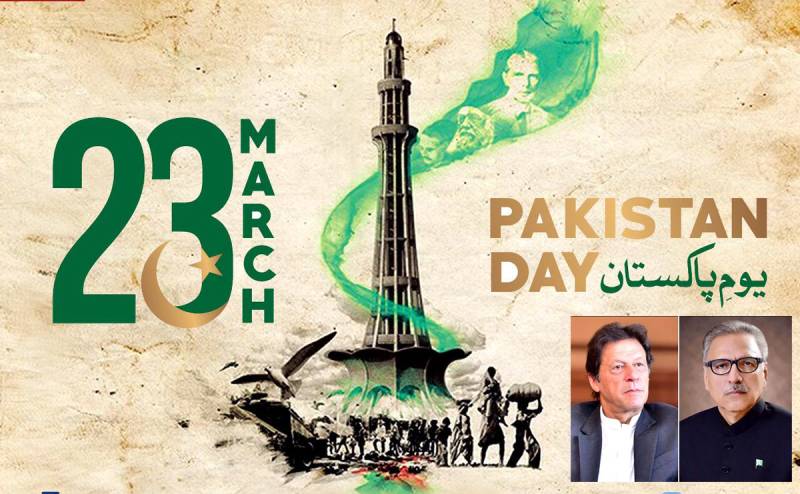 ISLAMABAD – The nation celebrates Pakistan Day today with traditional zeal and zest, President Dr. Arif Alvi and Prime Minister Imran Khan in their separate messages on this day have urged the people to continue efforts to make the country truly democratic and a welfare state.

President Dr. Arif Alvi, 71, in his message reaffirmed the resolve to make Pakistan an economically stronger and successful country. He also urged the people to remember the Kashmiri people, who are being subjected to the worst form of repression and state-sponsored terrorism.

President added that the world must take notice of grave human rights violations being committed by India in the Indian Illegally Occupied Jammu and Kashmir. Adding that the key to durable peace in South Asia is only the resolution of the Jammu and Kashmir dispute in accordance with the relevant United Nations Security Council resolutions.

"On this Pakistan Day, we pay homage to the founding fathers of Pakistan whose services and sacrifices led to the creation of a separate homeland for the Muslims of the sub-continent." pic.twitter.com/fFRUAHnTdr

Meanwhile, Prime Minister Imran Khan while acclaiming the nerve of the Pakistani nation against the ordeals in the past reaffirmed his commitment to making the country a progressive and prosperous state parallel to Riyasat-e-Madina based on rule of law and meritocracy.

1940 was a significant event when the Muslims of the Sub-Continent decided to establish a separate homeland to free themselves from the chains of oppression and slavery of the Hindutva mindset, he further added.

The premier also expressed solidarity with the people of Indian Illegally Occupied Jammu and Kashmir who are being subjected to the worst form atrocities in the valley.

Today, we celebrate the adoption of the Pakistan Resolution by the Muslim League at the Minar-e-Pakistan Lahore which called for establishing a separate homeland for the Muslims.#OneNationOneDestiny #PakistanDay pic.twitter.com/5m0pFFg4Qt

We salute the bravery of the Kashmiri people and will continue to support them morally and diplomatically for the realization of their right to self-determination under relevant UNSC Resolutions, he added.