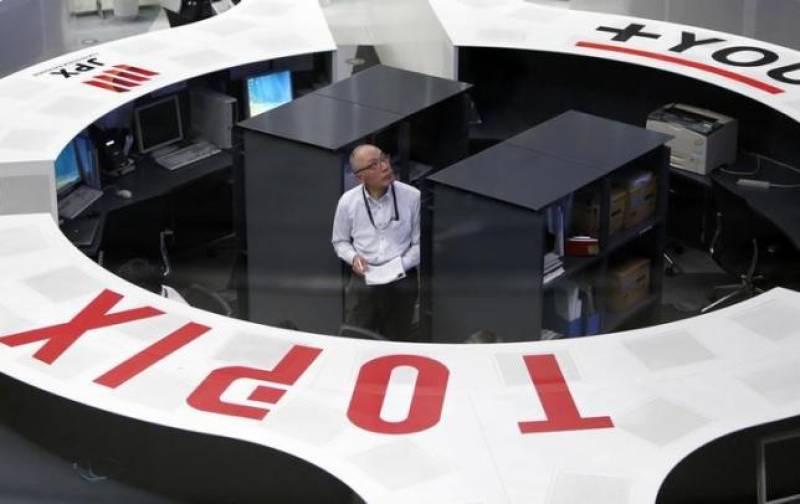 TOKYO (APP) - An index of Asian shares rose on Friday, on track for a weekly gain as a fresh record for the Nasdaq helped nudge it toward seven-year highs, while the dollar marched in place after more lackluster U.S. economic data.

MSCI's broadest index of Asia-Pacific shares outside Japan was up 0.3 percent, moving back toward a seven-year intraday high touched in the previous session. Japan's Nikkei stock index was down 0.3 percent in early trade, after hitting a 15-year peak on Thursday.

On Wall Street overnight the Nasdaq pushed above a record set in March 2000, the height of the dot.com boom.

But U.S. economic data contrasted with the shining share market performance. A larger-than-expected 11.4 percent drop in new home sales in March, together with disappointing global factory data, rekindled doubts about whether the economy is strong enough for the Federal Reserve to raise interest rates this year and gave investors an excuse to reduce long positions in the dollar.

"Clearly the market is pushing back expectations of a Fed hike," Mitul Kotecha, head of FX strategy, Asia-Pacific for Barclays in Singapore, said on a visit to Tokyo this week. "It's certainly something that clients are nervous about."

While a June increase in U.S. interest rates looks unlikely, he said the U.S. Federal Reserve is still poised to hike later this year depending on economic data.

"Any weakness in the dollar's ascent will be temporary, with strengthening likely toward the year-end," he said.

Against the euro, it bought $1.0810, as the common currency got a lift off its overnight low of $1.0666 from signs that Greece was making progress in securing fresh funds.

German Chancellor Angela Merkel said on Thursday everything must be done to prevent Greece running out of money before it reaches a cash-for-reform deal with its international creditors.

Oil prices drifted off the overnight highs that were logged after Saudi Arabia and its allies continued bombing missions in Yemen that raised concerns about the security of Middle East oil supplies.