I see no difference between US and its 'tool' ISIS, says former Afghan president Hamid Karzai 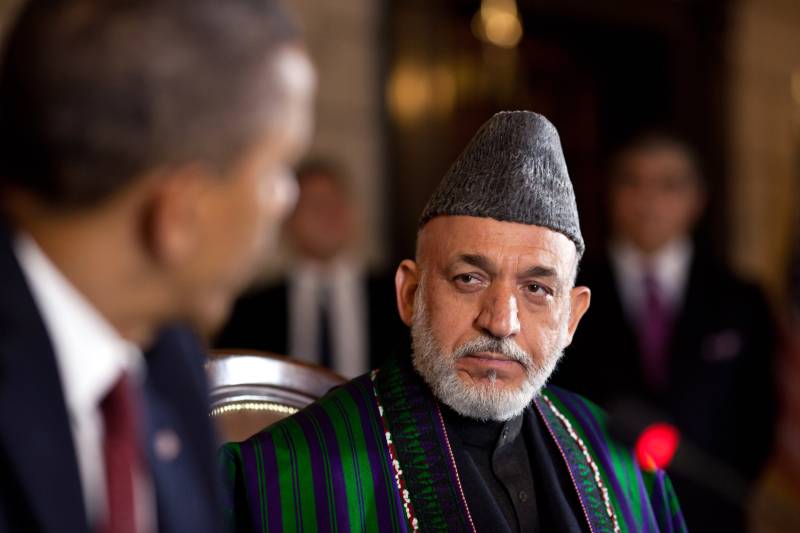 KABUL - Former president of Afghanistan Hamid Karzai  claimed on Wednesday that the militant group ISIS was a tool of the United States.

In an interview with Voice of America (VOA), Karzai slammed the feeble anti-terror policies of United States and went a mile more by stating that there was no difference between US and ISIS.

The former president took aim at the recently sworn in Trump administration for its weak attack on an ISIS stronghold using the largest ever non-nuclear weapon (MOAB).

He said, 'The bombing was an insult to Afghanistan and that the US was just using Daesh as an excuse' Karzai observed adding that it was a violation of Afghanistan's sovereignty and a violation of the environment.

Hamid Karzai stressed the need for a constructive dialogue with Taliban owing to their control in the war-torn region.

'The Taliban is a major reality in today's Afghanistan. The Americans themselves say that they (Taliban) control 50 percent of the Afghan territory. When a force controls 50 percent, countries have no option but to talk to them. The US itself talks to them — they meet them in their office in Qatar.' he noted.

Karzai's statement apparently tantamounts the revelation leaked out by global whistleblower WikiLeaks during the 2016 elections.

Although the observation of Karzai regarding ISIS as a tool of US seems irrational considering the all out war US has waged against the militant group but what adds more weight to his opinion is the release of e-mails by WikiLeaks, suggesting almost the same.

NEW YORK (Web Desk) - Pentagon ( headquarters of the United States Department of Defense) paid a UK PR firm half a ...

In a leaked email sent on August 17, 2014 by Hillary Clinton to her presidential campaign manager, John Podesta, who was counsellor to Barack Obama at the time, admitted that Qatar and Saudi Arabia 'were providing clandestine financial and logistic support to ISIL and other radical Sunni groups in the region'.

Interestingly, Saudi-Arabia and Qatar were major donors to the Clinton Foundation, thus posing a serious question mark to the practices of United States.

Furthermore, the United States allegedly warned ISIS of pending attacks and allegedly gave them safe passage from Mosul, Iraq into Syria in order to fuel the Arab Spring protests and to ouster Bashar Al Assad.

Moreover, Wikileaks’ Julian Assange provided historical context for how the ‘CIA created ISIS’ in November 2016. Not only that, the Bureau of Investigative Journalism disclosed in October last year that, Pentagon ( headquarters of the United States Department of Defense) paid a UK PR firm half a billion dollars ($540mn) to create fake terrorist videos in Iraq in a secret propaganda campaign.

US military joined hands with PR firm Bell Pottinger which is renowned for its controversial clients including the Saudi government and Chilean dictator Augusto Pinochet’s foundation, to create the propaganda in a secretive operation.

Were the ISIS "Jihadi John" beheading videos staged by the CIA? https://t.co/A1vY9FVhTE pic.twitter.com/S40tlUSK9i

Connecting the dots as indicated by Hamid Karzai and WikiLeaks' Assange, it can be inferred that the rise of Mujahideen and ISIS/ISIL was due to the immense amount of money invested in Afghanistan ostensibly to wipe put terrorism but actually to fuel the fire a bit more.

The 1979 year was dubbed as the “year zero” of the modern era by Assange as WikiLeaks released a massive amount of classified US documents. The subsequent events led to the uprising of global subversive elements according to Assange's observation.