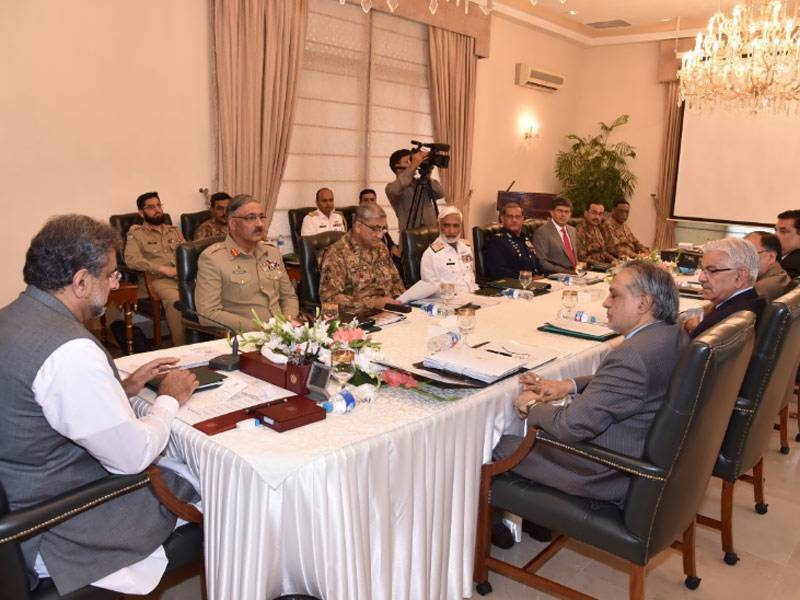 ISLAMABAD - A high-level meeting of military and political leaders under the chairmanship of Prime Minister Shahid Khaqan Abbasi concluded Thursday evening with a strong rejection of US President Donald Trump's accusation that Pakistan has been undermining the US's so-called 'war against terror' despite receiving billions of dollars in aid.

National Security Committee (NSC) has outrightly rejected the specific allegations and insinuation made by the US President, Trump against Pakistan.

"More specifically, we would like to see effective and immediate US military efforts to eliminate sanctuaries harboring terrorists and miscreants on the Afghan soil — including those responsible for fomenting terror in Pakistan. The Afghan war cannot be fought in Pakistan."

It was observed that to scapegoat Pakistan will not help in stabilizing Afghanistan. In fact, being its immediate neighbor, Pakistan has an abiding interest in peace and stability in Afghanistan.

It was also decided that as a next step, the foreign minister will kick-off a tour of all states friendly to Pakistan for reassurances of their support in the matter.

In the first of these visits, the foreign minister will visit China, where he will consult the Chinese leadership and present Pakistan's perspective on the matter.

The conclusions of the meeting were later shared in Senate by Foreign Minister Khawaja Asif.

"The committee observed that Pakistan had to manage the blow-back of a protracted conflict in Afghanistan that resulted in a deluge of refugees, flow of drugs and arms and, recently, terrorist safe havens in eastern Afghanistan," the foreign minister said, reading out from a lengthy statement.

"The committee observed that these safe-havens harbour anti-Pakistan terrorist groups that continue to operate and launch attacks inside Pakistan. The fact remains that the complex issues and internal dynamics inside Afghanistan pose a grave challenge not only to Pakistan but to the broader region and the international community.

"While noting the US commitment to continue to shoulder the burden of Afghanistan and reverse the expanding ungoverned spaces in the country, the committee observed that Pakistan has consistently supported all international efforts for a stable and peaceful Afghanistan," he added.

"It was observed that Pakistan has also committed more than a billion US dollars to the infrastructural and social development in that country," he observed.

"Over the years, Pakistan has worked with both the United States and Afghanistan to promote peace through a politically negotiated outcome which, in Pakistan’s view, remains the best option to bring stability to this war torn country.

"A prolonged military campaign in Afghanistan has resulted in destruction and the killing of hundreds of thousands of Afghan civilians; however, Pakistan has always endorsed and supported all Afghan-owned and Afghan-led initiatives for peace," he said, defending Pakistan's perspective on a lasting solution for the neighbouring country.

"It is hoped that the strategy will pave way for the dignified return of millions of Afghan refugees residing in Pakistan for which we are willing to extend all possible cooperation.

"More specifically, we would like to see effective and immediate US military efforts to eliminate sanctuaries harboring terrorists and miscreants on the Afghan soil — including those responsible for fomenting terror in Pakistan. The Afghan war cannot be fought in Pakistan," he warned.

"On its own part, Pakistan has taken indiscriminate actions against all terrorist networks and sacrificed tens of thousands of troops and civilians in this fight.

"The demonstrated security improvement inside Pakistan would not have been possible without eliminating all terrorist hideouts.

"Moreover, successful cooperation with the US in the past against the common enemy, terrorism, reflects Pakistan’s unflinching commitment to eliminate this menace.

"The committee stressed that instead of any financial or material assistance, there should be understanding and recognition of our efforts, contributions and sacrifice of thousands of Pakistanis and over $120b of economic losses.

"We consider the lives of the people of other countries as sacred as the lives of our own people, which is why we have not let our resources be used against our neighbours," he later said.

"The claims of aid worth billions of dollars being provided to us by the US are also misleading to the extent that since 2001, the reimbursements to Pakistan only account for a part of the cost of the ground facilities and air corridors used by the US for its operations in Afghanistan — rather than any financial aid or assistance," he said.

"On the matter of the people of India-held Kashmir, the committee has reiterated Pakistan’s political, diplomatic and moral support," he said, responding to the US's blacklisting of a Kashmiri separatist group which enjoys popular support in the conflicted region.

"The committee has also reaffirmed Pakistan’s resolve to protect its sovereignty and territorial integrity," he told the Senate.

Preempting possible criticism of Pakistan's nuclear programme after the US's shift in stance, he reminded those listening that: "The committee understood that as a responsible nuclear-weapon holder state Pakistan has in place a robust command and control system, which has been universally recognised and appreciated."

Turning to the Afghanistan conundrum, the foreign minister assured that: "Pakistan will continue to extend all possible cooperation to the international community for the objective of achieving peace and stability in Afghanistan and the broader region."

"Pakistan’s effective counter-terrorism operations have clearly proved that tide of terrorism can be reversed and we are willing to share our experience with both the US and Afghanistan," the foreign minister offered.