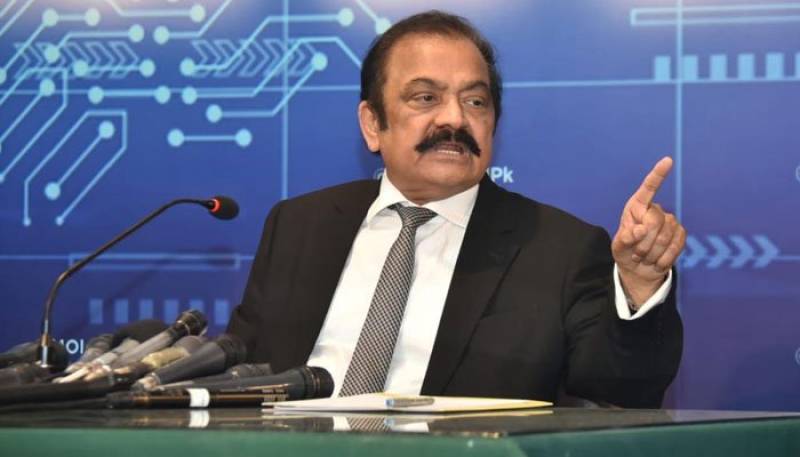 ISLAMABAD – Sharif led federal government has announced not to permit the former ruling Pakistan Tehreek-e-Insaf to conduct its long march in the country’s federal capital, citing the 2014 sit-in.

Interior Minister Rana Sanaullah, who was flanked by other members of the coalition government, announced the decision amid the crackdown against PTI leaders across Pakistan.

The PML-N leader addressing the news conference said the interior ministry has directed the law enforcers to deal strictly with the agitators. The administration in the federal capital has also imposed Section 144 of the Criminal Procedure Code of 1973 for two months.

Rana Sanaullah said Imran Khan-led party will be stopped so they cannot propagate misleading agendas. The long march has nothing to do with the 'democratic norms', the security czar said, adding PTI members are 'hell-bent' on spreading anarchy in Pakistan.

Mentioning the death of a cop in Lahore during midnight raids, the Minister said that PTI leaders have moved from abuses to bullets as he alleged former PM Imran Khan to divide the nation.

Imran wants to spread chaos and disorder, Sanaullah said, adding that PTI’s leadership had now taken refuge in KP and intends to use the province’s resources to march against the government.

The PML-N Minister said added to protect the lives and properties of the people at all costs.

Earlier in the day, PML-N leader Attaullah Tarar announced that Punjab government has collectively decided to impose Section 144 in most populous region, saying the decision was being taken in light of reports that weapons were being collected with the intention to start violence.

On the other hand, PTI Chairman Imran Khan announced to carry on with the party’s long march towards Islamabad. Addressing a presser, Khan said that he will lead the biggest procession in Pakistan’s history tomorrow.

Taking a hit at Sharif led government, Imran said that there was no difference between the ‘fascist government’ and the military dictators of the past as both used the same tactics.