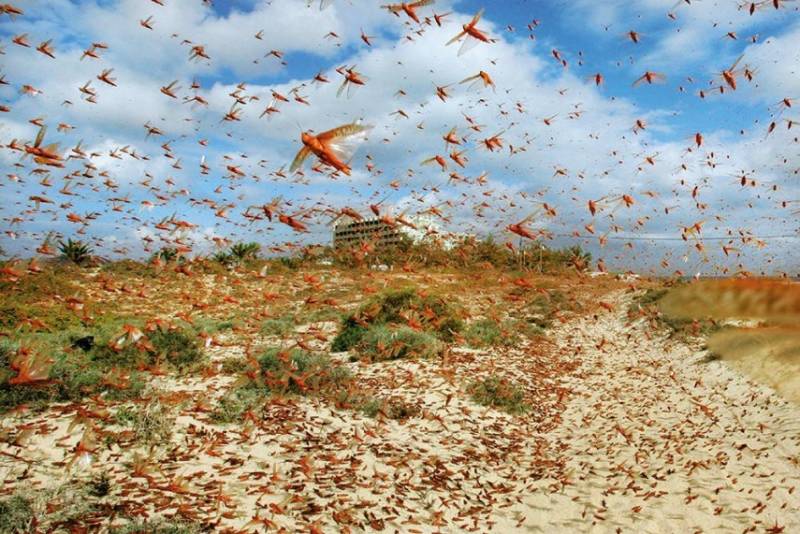 BEIJING – The Chinese government has decided to offer urgent assistance to combat locust and dispatch a working group composed of leading experts to help Pakistan develop targeted programs to jointly cope with the locust disaster.

“Although China itself is now experiencing the unprecedented epidemic situation, the Chinese government has decided to dispatch a working group composed of leading experts to help Pakistan develop targeted programs, so as to jointly cope with the locust disaster,” Cheng Xizhong, Special Commentator of China Economic Net and Visiting Professor at Southwest University of Political Science said in his article public by China Economic Net.

The scholar remarked that the Chinese government and the Chinese people are very much concerned about the locust disaster in Pakistan. China and Pakistan are all-weather strategic cooperative partners that share a good tradition of mutual assistance. In the face of difficulties, both sides have spared no efforts to help each other.

The China-Pakistan relations has become a model for promoting the construction of a community with a shared future for mankind.

He said that April is the harvest month in Pakistan. If there is another locust disaster, all crops will be eaten by a new generation of locusts, and the loss will certainly be more serious than ever.

At the critical moment when Pakistan is sounding the locust disaster alarm, the Chinese government has decided to offer urgent assistance. Although China itself is now experiencing the unprecedented epidemic situation, the Chinese government has decided to dispatch a working group composed of leading experts to help Pakistan develop targeted programs, so as to jointly cope with the locust disaster.

He said that China has set up an emergency project to help Pakistan prepare pesticide and spraying equipment. Chinese drones have already joined the battle against locust in Pakistan. These fully embody the profound friendship of sharing weal and woe between China and Pakistan in times of adversity.

“There has been few large-scale locust disasters in China since its founding in 1949 due to various effective prevention and control measures, but China had experienced frequent locust disasters in history. I could often see small locusts on soybean fields of our village when I was a child, but now we can hardly see them,” he said.

Throughout history, locust disasters have the following characteristics. First, it has strong reproductive capacity and fast reproduction speed. As experts estimated, the desert locust, which originated in Africa, has a very fast breeding speed. They would give birth to another generation per month. Each generation can live up to three months. The number of locusts in each generation increases 20 times than the previous one. The swarm will be up to 500 times larger in number by June if the situation’s out of control.

Second, locusts live in groups with high density. According to statistics, the density of locusts in a relatively large locust disaster can reach 10,000 per square meter.

Third, locusts are capable of flying long and fast. They can fly for five or six days, and the fastest speed can reach 40 kilometers per hour.

So, how to prevent and control locusts? First, biological control is the fastest developing control method in recent years. Biologists use pathogenic microorganisms to kill locusts. Chicken, duck and goose are also good at fighting locusts. According to a report, China’s Zhejiang Province once “dispatched” 30,000 ducks by air to Xinjiang to eat locusts.

Second, pesticide control is necessary in the outbreak of locust disaster.

Third, ecological control is a fundamental measure to control locust disaster. The main method is to cut off the food chain of locusts by improving the land and vegetation coverage, creating a healthy ecological environment that is not conducive to locusts’ habitat and reproduction, but conducive to the reproduction of locusts’ natural enemies, so as to achieve the goal of pest control.

Fourth, the adoption of modern technologies, such as GPS and aircraft, can effectively improve the effect of pesticide spraying. Satellite remote sensing images in combination with GPS Positioning, geographic information system and meteorological data, can be used to predict when the locust disaster will occur and how large it is, so as to effectively improve the level of locust disaster control. “Big data” can also be applied to locust control practice.

China Agricultural University has developed an auxiliary system for smart decision to prevent and control locust disaster. Through the calculation and analysis of historical data and real-time data of “locust area”, an effective early-warning mechanism has been established.