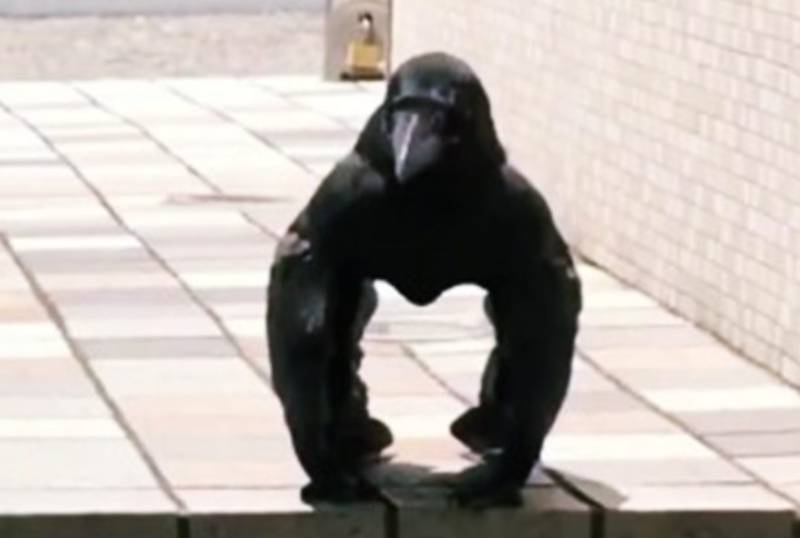 JAPAN – An unusual bird, believed to be a large-billed crow, striking a pose in Japan has gone viral on the internet.

On 20th June, a Twitter user filmed a crow that gives a gorilla look while standing in a Japan street – and it looks like something straight out of a horror film.

The creature, which is dubbed “gorilla crow,” can be seen perched on its big wings like an ape standing on its forearms.

The video, which was shot at the Parco shopping centre in Nagoya, Japan by @keita_simpson, has received over 100,000 shares on the social media platform.

The twitter user told Newsweek that when he first spotted the crow, he was very creeped out since it looked like a “zombie,” but after observing its odd behaviour for about a minute, he then thought it was beautiful.

After the video was uploaded to Twitter, many people couldn't stop themselves from commenting on the crow’s weird pose:

Responding to the viral post, Eventually, Kaeli Swift from the University of Washington explained that the bird, which was a large-billed crow, has a face that’s “a little out of proportion” and is a species that lives in Asia.

There’s a very strange (uncredited) video of crow making the rounds on reddit. Here’s the deal. First, this is a large-billed crow, which is why the face is looking a little out of proportion. pic.twitter.com/LUYuMimvAp

“This bird is not missing its legs and propping itself up with its wings, that would be physically impossible,” she wrote on Twitter. “Also, not that it’s relevant to the answer, but a crow without legs couldn’t fly, because it couldn’t generate any lift. So legless crow is a dead crow.”

What it’s actually doing is sunning itself. When birds sun they drop their wings and cock their tails. At the right angle that could obscure the legs and tail making it look like they’re missing.

Swift then added that the bird was sunning itself, and “when birds sun they drop their wings and cock their tails. At the right angle that could obscure the legs and tail making it look like they’re missing.”

According to Swift, the “gorilla crow” exhibited a common bird behaviour, which involves the bird trying to cool off from hot weather and protect its feathers. Such birds have been observed in various countries, including India, Japan, and Thailand.

Isn't it amazing to see big built creatures like this crow in the viral video?