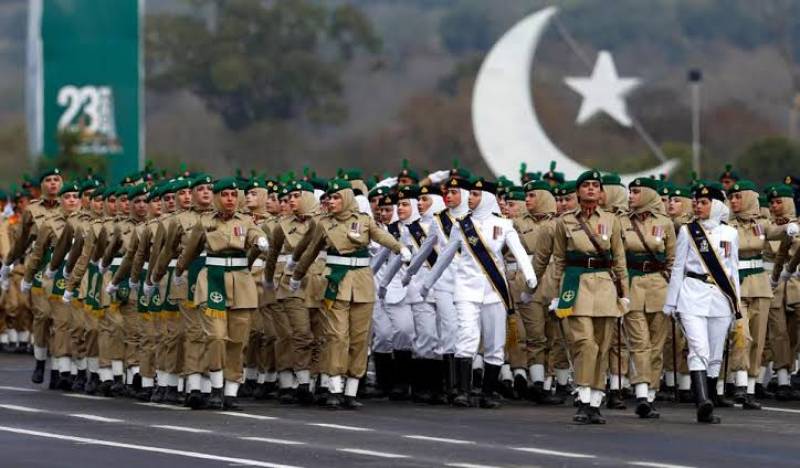 Aurat March debates are never-ending in Pakistan where protesters gather around and demand to curb the deeply-rooted patriarchy in the country.

But this time around, the hashtag #RealAuratMarch has won hearts on the Internet and have become the talk of the town.

Pakistan’s military parade which was earlier postponed due to uncertain weather on March 23 was held today in Islamabad.

With the spectacular armed forces of Pakistan displaying their military might, Pakistani women within the army are stepping forward and the audiences are loving it.

The female armed officers stole the show as they performed outstanding marches during the Pakistan Day parade. Displaying the perfect examples of women empowerment and leadership, they showcased dignified equality that is worth praising.

Appreciating the breathtaking march, the Internet poured in love for the march.

True example of women empowerment ♥️ .
This is what we call respectable aurat march ❤🇵🇰#PakistanDayParade pic.twitter.com/Xua4koEb27

This is the Real Aurat March that we all Love & Support.❤️#PakistanDayParade pic.twitter.com/mICe2IMptb

Real Aurat. Real March. Pakistan’s Azadi March. Something to be really proud of. May Allah Karim be with you, Daughters of Pakistan. #23rdMarch2019 pic.twitter.com/kFNCOouYjk

Dignified women, breaking down barriers, and contributing meaningfully to society.

Female officers at the Pakistan Day parade were the epitome of women empowerment. Displaying utmost strength and valiance, the female officer's squad showed that they can stand tall with the male officers.

#AuratMarch and #PakistanDayParade were also trending on Twitter earlier today.