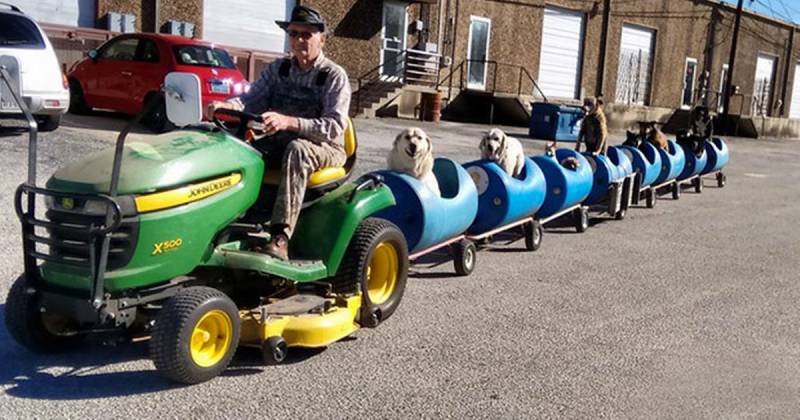 FORT WORTH, Texas (Web Desk) - Ever since he retired 15 years ago, Eugene Bostick has spent a huge chunk of his time caring for animals. Among the many awesome things he does perhaps the most interesting is playing train conductor for a bunch of rescued stray dogs.

He actually built a custom train for the canines, consisting of a tractor pulling a row of plastic barrels with the tops cut off.

The 80-year-old from Fort Worth, Texas, says he never planned on spending so much time with dogs, but it sort of just happened. “We live down on a dead-end street, where my brother and I have a horse barn,” he told online magazine The Dodo.

“People sometimes come by and dump dogs out here, leaving them to starve. So we started feeding them, letting them in, taking them to the vet, to get them spayed and neutered. We made a place for them to live.”

But Bostick has done more than just give the strays a place to live. He’s actually made their lives fun, by constructing a unique train to take them on little trips, the Oddity Central reported. 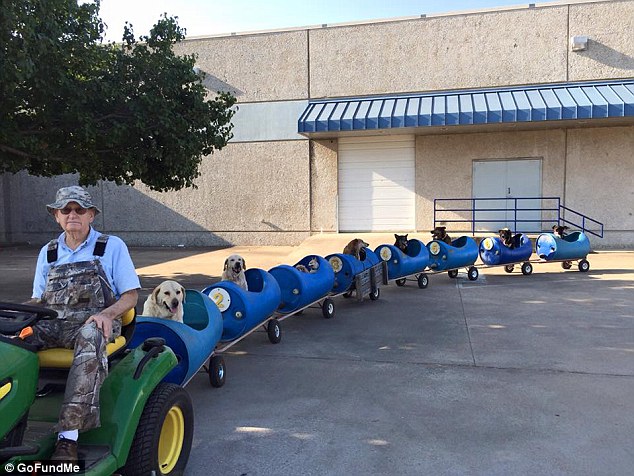 “I started out with my tractor,” he explained. “I had a little trailer and I put four or five dogs in there and took them riding. Then more dogs started to show up and I thought ‘Uh-oh! That’s not enough room.’”

He started to think of ways he could take all his dogs on joyrides, and the solution came to him pretty soon. “One day, I was out and saw this guy with a tractor who attached these carts to pull rocks,” Bostick said.

“I thought that would do for a dog train. I’m a pretty good welder, so I took these plastic barrels with holes cut in them and put wheels under them and tied them together.”

That’s how the dog train was born. Now, Bostick can be seen puttering around town in his tractor, with nine dogs in tow. He drives them down the quiet streets, through the forest near their home, across Fort Worth golf course, and stops by the creek for some fresh air.

And the formerly abandoned dogs love their train to bits - they look happier and healthier by the day.

“Whenever they hear me hooking the tractor up to it, man, they get so excited,” Bostick said. “They all come running and jump in on their own. They’re ready to go.”

But it’s not just dogs Bostick and his brother Corky care for, they are kind to other animals too. “In our generation, people shot everything they saw,” Corky said.

“We finally realised you know, what was happening, so we just went the reverse.”

The brothers now spend their mornings feeding the wildlife around their property.

As Bostick frequently rides the dog train around town, it has attracted the attention of locals - they often stop to have their picture taken with the unique contraption and post the photos on social media.

“This is the coolest guy, he rescues stray dogs and every morning he takes them for a train ride by our building,” one woman tweeted.

But Bostick says he isn’t doing it for the attention; he just likes making the dogs happy. “I’m getting up in age,” he said. “I’m 80 now, so I suppose I can’t last too much longer, but I’ll keep it going as long as I can. The dogs have a great time. They just really enjoy it.”