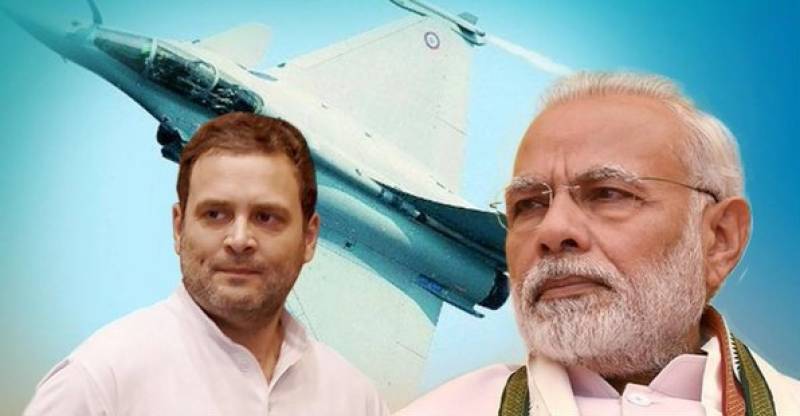 The Congress president was speaking to social media workers of his party in his parliamentary constituency Amethi in Uttar Pradesh Monday night when he fired a new, virulent broadside against PM Modi.

"The man who came to remove corruption has himself given Rs. 30,000 crore to Anil Ambani. The fun has just begun, things are set to turn more interesting. In the next two-three months you will have fun after we will show you Narendra Modi's work - Rafale, Vijay Mallya, Lalit Modi, Demonetisation, Gabbar Singh Tax. All of it is theft. One by one, we will show that Narendra Modi ji is not a chowkidar (gatekeeper), but a chor (thief)," Rahul Gandhi said.

The Congress president also tweeted claiming he would ‘bring justice to every jawan who has served India and has been dishonoured by the govt.’

The deal to buy Rafale fighters was signed by the BJP-led government with France in 2016 after the previous Congress government's negotiations were scrapped. The plan was to buy 18 off-the-shelf jets from France's Dassault Aviation, with 108 others being assembled in India by the state-run Hindustan Aeronautics Limited (HAL) in Bengaluru.

NEW DELHI - An Indian lawmaker politician has termed the Rafale jets deal as the "biggest scam” in the history of the ...

On Monday, the BJP claimed that the Congress-led UPA government scrapped the Rafale deal with France as Rahul Gandhi's brother-in-law Robert Vadra's company was not made a part of the deal.

PM Narendra Modi, in a massive BJP rally in Madhya Pradesh, threw a challenge at Congress President Rahul Gandhi. In the Tuesday’s rally in Bhopal, the PM said, ‘let Congress throw muck at me. The more muck they throw, the more the number of lotuses that will bloom in the country.’

“The lotus will bloom in every corner... in every booth… in every house… in every state government in the country,” the PM said.