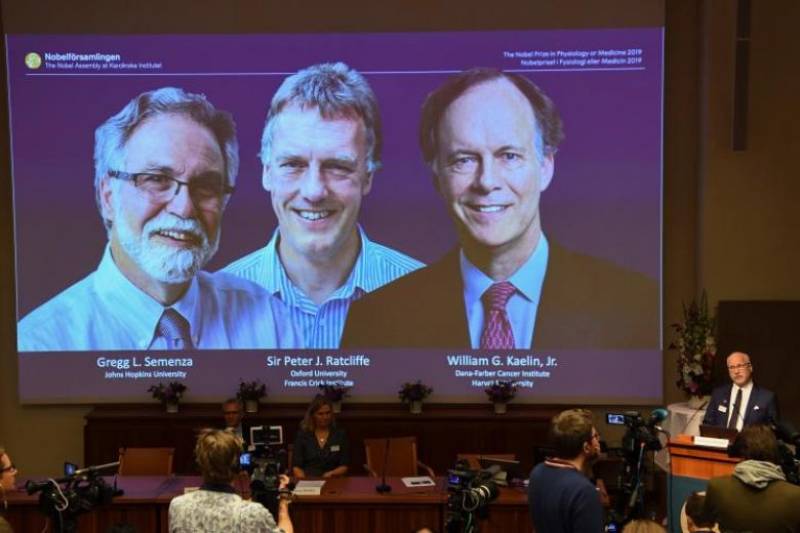 STOCKHOLM - Three researchers from the US and Britain on Monday shared the Nobel Medicine Prize for research into how human cells sense and adapt to changing oxygen levels, opening up new strategies to fight common diseases such as cancer and anemia.

William Kaelin and Gregg Semenza of the US and Britain's Peter Ratcliffe split the nine million Swedish kronor ($914,000, 833,000 euros) award.

While the fact that humans need oxygen to survive has been understood for centuries, how the body registers and responds to oxygen was little known prior to the trio's pioneering work.

"They established the basis for our understanding of how oxygen levels affect cellular metabolism and physiological function," the jury said.

Semenza studied a gene known as EPO which causes the body to create more red blood cells and isolated the specific DNA segments that help it to adapt to low oxygen levels.

Radcliffe and Semenza then applied this knowledge to show that the oxygen sensing mechanism was present in virtually all human tissues.

Kaelin identified another gene, present in patients with a genetic disorder that puts them at far greater risk of certain cancers. The gene rewires the body's ability to prevent the onset of cancer, and it plays a key role in how cancer cells respond to low oxygen levels.

Their work has shed new light on the specific, cell-level processes the body undergoes when low on oxygen -- from helping our muscles function during exercise to adapting to life at high altitude.

Two Swiss scientists who on Tuesday won the Nobel Physics Prize along with a Canadian-American colleague hailed their win as "simply extraordinary".

Swiss scientists Michel Mayor and Didier Queloz, who shared half the 2019 prize "for the discovery of an exoplanet orbiting a solar-type star", said the discovery was "the most exciting of our careers".

"Being awarded the Nobel Prize (for this discovery) is just simply extraordinary," they said in a statement issued by the University of Geneva.

Canadian-American James Peebles won the other half of the prize for "theoretical discoveries in physical cosmology".

Mayor was a professor at Geneva University and Queloz was his doctorate student when the pair on October 6, 1995 "revolutionised the world of astrophysics by announcing the first discovery of a planet situated outside of our solar system," the university said.

The very first exoplanet was named 51 Pegasi b. News of its discovery "was like a bomb exploding in astrophysics circles", the university said.

BREAKING NEWS:
The 2019 #NobelPrize in Physics has been awarded with one half to James Peebles “for theoretical discoveries in physical cosmology” and the other half jointly to Michel Mayor and Didier Queloz “for the discovery of an exoplanet orbiting a solar-type star.” pic.twitter.com/BwwMTwtRFv

"This is a fantastic recognition of the work accomplished by Michel Mayor and Didier Queloz," he said in the statement.

"It is a testimony to the quality of their scientific process, their rigour but also to creativity and a capacity to think -- and to search -- outside of the beaten path, which is the source of the greatest discoveries," he said.