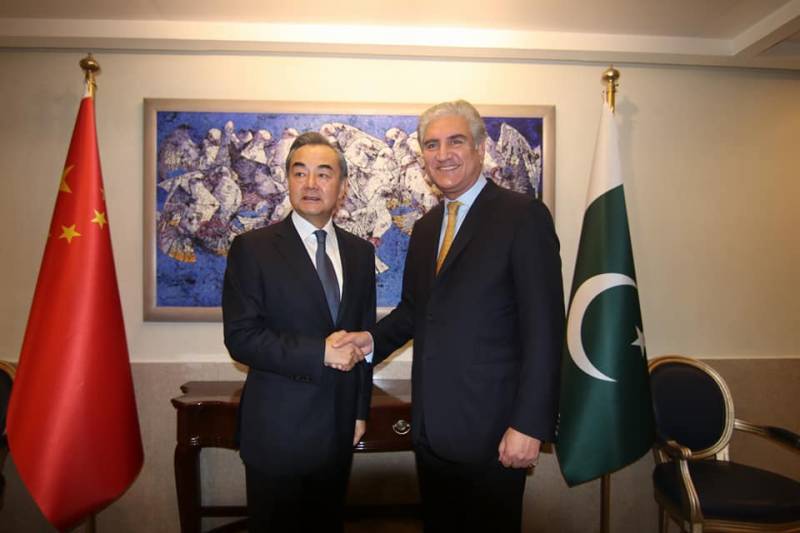 NEW YORK - In a meeting between Islamabad and Beijing on the sidelines of the United Nations General Assembly session, China’s foreign minister Wang Yi said they were waiting for the visit of Pakistan’s Prime Minister Imran Khan.

In the informal meeting, Foreign Minister Shah Mahmood Qureshi also informed his Chinese counterpart that the prime minister was himself looking forward to visiting China. Both dignitaries discussed bilateral relations in the meeting which was also attended by the officials of the two countries.

Qureshi reiterated that China Pakistan Economic Corridor (CPEC) was a project of great significance, adding that it is among the top priorities of the incumbent government.

Pakistan’s foreign minister highlighted that the multi-billion dollars project has strengthened the bilateral relations which are historical in nature.

He vowed to take the strategic cooperation between the two countries to the new height.

Earlier this month, Yi arrived in Pakistan for a three-day visit, a day after US Secretary of State Mike Pompeo and US military chief General Dunford visited Islamabad.

The Chinese foreign minister held a one-on-one meeting with Shah Mehmood Qureshi in which both discussed ways to cement ties between the two all-weather friends, especially in the backdrop of regional security and CPEC.

During his visit, Yi also called on PM Imran Khan in Islamabad to discuss regional situation and global issues with the new government in the South Asian country.

ISLAMABAD - The Chinese State Councillor and Foreign Minister Wang Yi, who is on a three-day official visit to ...

Imran Khan, who took the office last month, thanked Mr Yi for the good wishes of Chinese leadership. He reiterated that friendship with China is a cornerstone of Pakistan’s Foreign Policy.