10-member WHO team to investigate HIV outbreak in Larkana 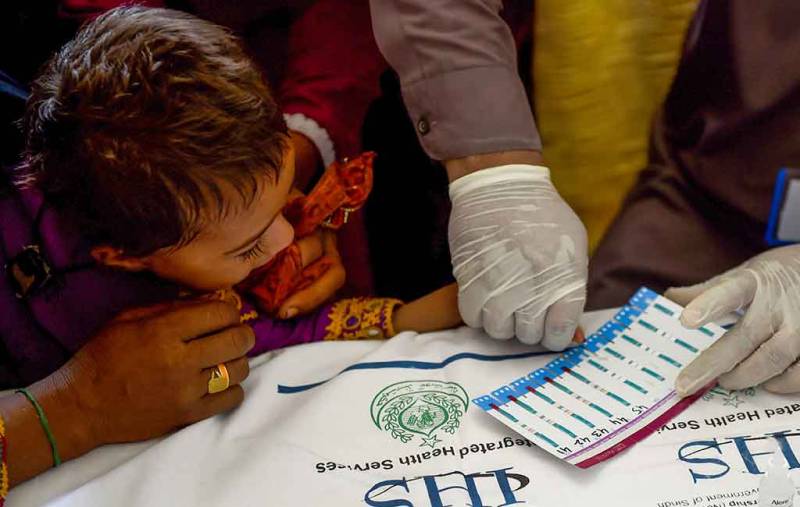 ISLAMABAD - Minister of State for National Health Services, Regulations and Coordination Dr Zafar Mirza Sunday said that a 10-member team of World Health Organization’s (WHO) technical and a professional expert would visit Pakistan to investigate the outbreak of HIV in the affected area of Larkana.

Addressing a press conference, the minister said that after reviewing the situation the federal government contacted the WHO Headquarters and asked their technical and professional support to investigate Larkana HIV outbreak.

He added based on this request, a WHO high-level mission was coming to the affected area. He said that the decision to invite international experts was made to exactly reviewing the situation and to ascertain the cause, advise on mitigation measures and ways and means of avoiding future recurrence.

He said that so far 21,375 people had been screened, out of which 681 people had been identified as HIV positive with case detection rate of 3.2%. He added the most striking feature of this outbreak was the fact that children between the ages of 2-5 years were most infected followed by age group 6-15 years.

He said that the Federal Ministry on his advice started communication with various United Nations agencies for a proper follow up and support to this outbreak and accordingly a high-level meeting was convened here with all UN agencies, Civil Society Organizations and Sindh AIDS Control program (SACP) to deliberate upon the outbreak situation in Ratodero and coordinate a joint response.

He said that National AIDS Control Program (NACP) supported the Provincial program in the areas of blood screening and HIV treatment. He added NACP is also providing assistance and support in specialized HIV investigations like CD4 (Lymphocyte) count and viral load testing by providing additional supplies and CD4 machines to Larkana.

Dr Zafar said that the NACP had supported the establishment of a Paediatric ART centre at Larkana by proving all reporting tools and HR (Data entry operator) in addition to the existing HIV treatment centre (adult) at Chandka Medical College Hospital.

He said that NACP technical team was sent to Larkana to coordinate with SACP in outbreak response investigation and management. He added NACP was mobilizing UN Partners included WHO, UINCEF and UNAIDS besides and Global Fund to effectively address and halt the outbreak.

Dr Zafar said he also visited along with Provincial Minister of Health the Regional Blood Centre, which was the main laboratory for supplying safe blood to the hospital of the region.

He added he visited the Adult ART centre Larkana, where the HIV patients are being provided diagnostic and treatment facilities for the last so many years with the support of National AIDS Control Program.

The minister said he also visited the paediatric ART centre Chandka Medical College newly established soon after this outbreak, with the support of NACP and other partners. Unfortunately, the high numbers of Children between the ages of 2-5 years were reported in this outbreak, he added.

Dr Zafar said he visited the HIV Screening camps in Ratodero along with experts’ team, where he remained for a time to see the affected children and their families were screened at various sites.

He assured that the Federal Government under the leadership of Prime Minister Imran Khan is on top of the situation in Rattodero. “We will not relent till we get to the bottom of this outbreak, provide treatment to each affected and help the Sindh health department put in place a system to avoid such unfortunate occurrences in the future.”

He said that the team of an expert while in the field started HIV screening on one hand along with SACP and also held counselling sessions with HIV affected communities to ascertain the immediate cause of spread of HIV and to an alley, the fear and panic spread in the communities.

He said that with time a large number of people turned to screen camps to get themselves and their children tested for HIV. The peculiar feature of this outbreak was the identification of the very high number of children affected by this disease.

He said that an HIV outbreak was reported, by the local media, in Ratodero Taluka, district Larkana on April 25, 2019, as 15 children with complaints of persistent weight loss and fever, had been tested positive for HIV by a local Physician in Ratodero.

Blood samples of these 15 children were later sent to a referral laboratory of the SACP and as per the report shared by SACP, three of 15 cases were confirmed by Rapid Diagnostic Test on the first day.

On my direction, the NACP immediately responded to a request made by SACP to send a team to join the response and help in providing HIV screening kits. The national program immediately sent 3000 HIV test kits to Ratodero.