India: 17-year-old girl forced to give birth on street (VIDEO) 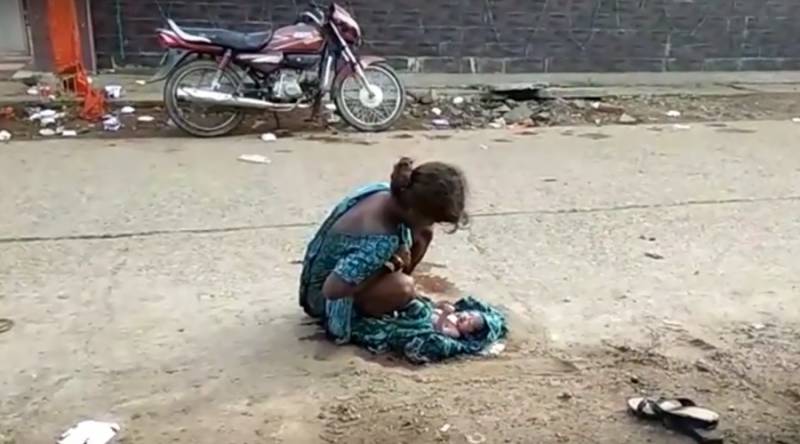 JHARKHAND - A 17-year-old girl who was abandoned by her family after falling pregnant has given birth on a street in India, according to local media reports. The girl gave birth on the side of the road in Chandil, a town in the state of Jharkhand in eastern India. She was said to have been less than 100 meters (330ft) from a health center.

A video published online purportedly shows the girl hunkered down with her baby in the street as cars and motorcycles pass by. The newborn, whose umbilical cord is still attached, is pictured crying as it lies wrapped in its mother’s dress.

Jagran.com, the website of India’s most widely read newspaper Dainik Jagran, reports that no doctors or nurses from the nearby medical center came to the girl’s aid despite locals alerting them to what was happening on their doorstep.

Local resident Om Prakash Sharma came across the girl on the street with her clothes drenched in blood, The Hindustan Times reports.

“She was in a miserable state. She was shivering and unable to lift and cuddle her infant. Heavy vehicles were crossing by but she didn’t have strength to move aside,” he said.

“Eventually, we put roadblocks around her and approached the CHC (Community Health Center) to take away the mother [and the] child.”

The girl finally got medical attention after locals transported her to the health center in a rickshaw. Locals later confronted doctors at the health center to demand to know why the woman had not been taken care of.

The teenager reportedly lived with her widowed mother but was kicked out of her home after she fell pregnant. She told reporters she was in love with a man but he ended the relationship after she became pregnant.