DPO Pakpattan allegedly transferred for not apologising to Khawar Maneka

According to initial media reports, Maneka, a senior official of the Customs department, used abusive language when police officials tried to stop him at a picket on Thursday.

Afterwards, DPO Rizwan Gondal was asked to apologize to Maneka at his home which he refused, saying the police officials present on the occasion did not commit any crime. 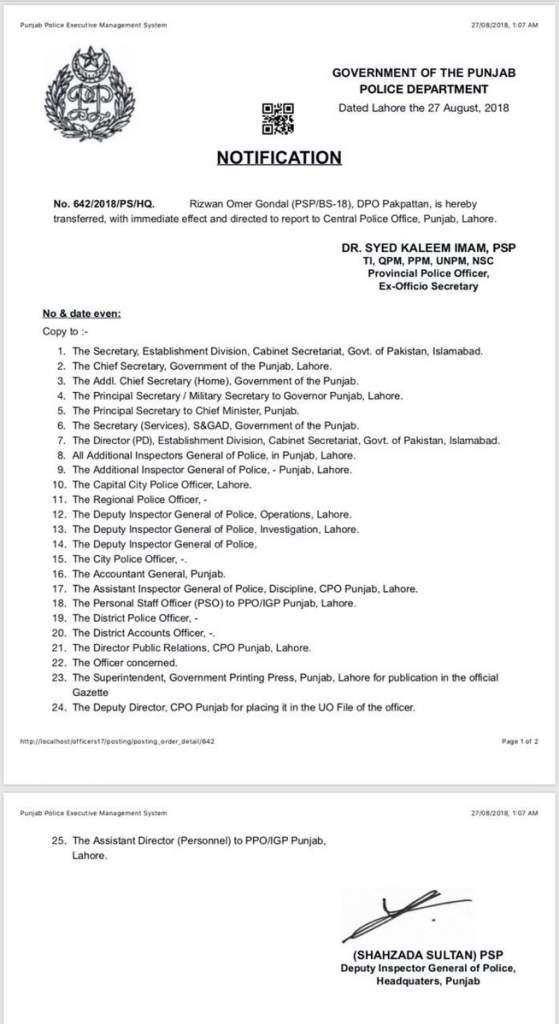 Gondal also informed Chief Minister Punjab, Usman Ahmed Buzdar about his stance on the matter after he and Regional Police Officer were asked to appear before him.

The CM Punjab Usman Buzdar, however, instructed the two officials to resolve the matter.

Maneka is a spiritual devotee of the 13th-century mystic Baba Farid Ganj Shakkar. Khawar’s father Ghulam Muhammad Maneka was a politician and also served as a federal minister under Benazir Bhutto.

Inspector-General Punjab, soon after the reports, denied that Gondal was transferred under any pressure.

He was transferred due to giving misleading statements about misbehaviour by police personnel with a citizen, the IG said in a statement.

An inquiry has also been ordered against Gondal for "giving a false colour to the transfer on social media".

The IG further said no flexibility will be shown against "misconduct and misguiding seniors" by any official or personnel.

'PTI doesn't have anything to do with the incident'

Information Minister Punjab Fayyaz ul Chohan said that the Pakistan Tehreek-e-Pakistan (PTI) has nothing to do with Pakpattan incident and that the party does not believe in meddling in institutions.

He promised to hold an investigation afresh and bring facts to the fore within 48 hours.

"Not one such incident took place in Khyber Pakhtunkhwa in five years led by PTI," he said.

The minister, however, went on to say that false colour is being given to the incident on social media to mislead masses.