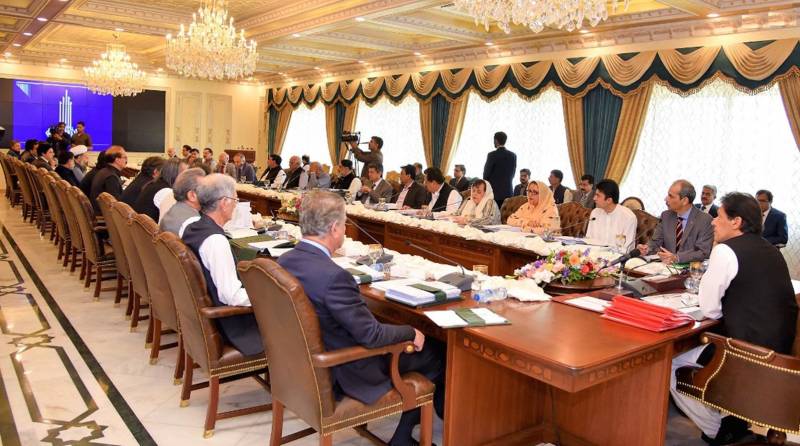 ISLAMABAD - Prime Minister Imran Khan chaired a meeting of the federal cabinet on Tuesday to discuss the overall situation of the country besides the prevailing situation in Indian occupied Kashmir.

Awan said the prime minister took the cabinet into confidence over his address to the nation concerning Kashmir.

She said Prime Minister Imran Khan informed the cabinet members about his decision to raise the Kashmir issue and that he had become the voice of the Kashmiri people.

The special assistant said the entire nation coming out on the streets for the rights of the Kashmiris is a message of 'Do More' for the rest of the world.

The SAPM said the cabinet also discussed options for the prime minister's address to the United Nations General Assembly in which he would present the case of the Kashmiri people; the address is scheduled on September 27th.

The prime minister has announced that whether any other country stands with Kashmir or not, Pakistan will stand by their Kashmiri brothers and sisters, said Awan.

The prime minister raised the issue of rehabilitation of drug addicts and safeguarding the rights of transgender persons during the cabinet meeting.

Firdous Ashiq Awan elaborated that the prime minister directed the cabinet to take measure to protect the rights of transgender persons and their economic empowerment.

The cabinet also approved the establishment of a rehabilitation centre for drug addicts in Islamabad whereas the prime minister also issued directives to the cabinet members to take strict action against child pornography.

Awan said that the name of the Kamyab Jawan Program was changed to the Prime Minister's Kamyab Jawan Youth Internship Program.