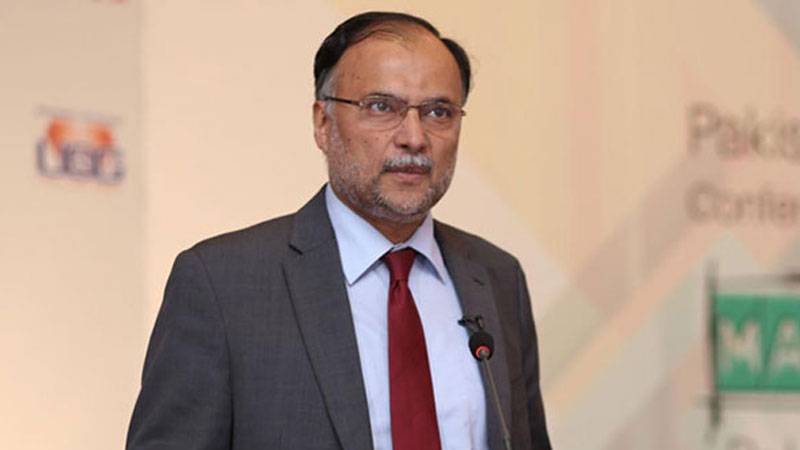 According to media reports, Ahsan Iqbal, a legislator from Narowal city of Punjab obtained Iqama from a Madina-based firm.

The pictures of his Iqama making rounds on social media suggest that he got his Iqama renewed in 2009 as well.

When the social media buffs derided the minister, considered a graceful voice of ruling party, Iqbal took to Twitter and clarified that he worked in Madina Munawarah from the year 2004-06 and afterwards retained Iqama without receiving any compensation for frequent travel, thus declaring it legal.

He went on and described that it was a natural desire to keep Madinah resident status for as long as one can.

For anyone who is blessed 2 live & work in Madinah it is a natural desire to keep Madinah resident status for as long as 1 can. No regrets

Earlier, showcasing his educational background, the minister noted that he chose to serve country ignoring a passport to 'Fortune 100'.

Some1 who chose 2 serve his country immediately after MBA from The Wharton School, passport 2 Fortune 100, doesn't have to prove anything

The legislator remained active throughout the day on Twitter and in another tweet clarified that he was a Marketing Specialist in Saudi Arabia adding that he won't mind even serving as a security Guard in one of the holiest cities of Islam.

When asked whether he declared the work permit in his nomination papers for general Elections 2013, Ahsan Iqbal replied 'Yes'.

He went on and maintained that he did not conceal his income regarding the Iqama.

No income. Not hidden shared with ecp

Facing a barrage of questions from Twitterati, Iqbal clarified that the work permit expired and was not effective anymore.

Another user took aim at the minister alleging that he slipped working for Fortune 100 in a bid to rob Pakistan of its resources but Ahsan maintained that his wealth plummeted as compared to the year 1993 when he first became the member of the National Assembly.

Alhamdulillah my worth today is 60% less than what it was in 1993 when I became MNA first time. Mush checked thoroughly

Renowned journalist Rauf Klasra posed another question for the lawmaker and inquired whether it was not a violation of laws not to receive compensation from Saudi Kafeel.

To this, he replied that many Kafeels were doing that.

Pl Check how many kafeels do it.

Apart from the Twitter clarification, a statement issued on Wednesday by a spokesman for the planning and development ministry said Mr Iqbal had served as an advisor to the governor of Madina from 2004 to 2006 on a digital economy project.

It claimed that the minister had not taken any salary for the project since 2006, adding that he had declared his Iqama in his ‘documents’ in 2013.

The spokesman said Mr Iqbal was not doing business in any foreign country and after the expiry of his Iqama it was not renewed.

The Iqama came a day after it was revealed that Defence Minister Khawaja Asif was drawing a staggering salary of more than Rs1.40 million from a UAE-based firm.

Documents show the PML-N minister, who is tipped to be the interim premier in case Prime Minister Nawaz Sharif is sent packing by the Supreme Court in the Panama Papers case, works as a “Management Consultant” in an Abu Dhabi-based firm and draws a monthly salary of AED50, 000 for his services.

He termed dual-office holding by federal cabinet members ‘criminal enterprise’ and said they were ‘criminals of the nation’.

“Have you ever seen in a democracy that a prime minister of a country serves as a sale manager after getting Iqama. Similarly, we heard that Defence Minister Khawaja has Iqama of another Gulf state,” the PTI chief said at a press conference on Wednesday.

ISLAMABAD - Prime Minister Nawaz Sharif has admitted before the Supreme Court that he had not only taken up an ...

Calling Mr Iqbal a ‘pseudo intellectual’ and ‘Aristotle of PML-N’, he said the minister also tried to hide his ‘corruption’ behind Islam, which was the main reason why he got Iqama of Saudi Arabia.

PTI spokesman Fawad Chaudhry said: “It is sad that Nawaz Sharif, who is prime minister of Pakistan, is also serving as a marketing manager in the UAE. Khawaja Asif, who is our defence minister and handles all security forces of the country, is a Munshi (record keeper) of a UAE-based firm. Finance Minister Ishaq Dar, who runs the country’s finances, is also an employee of a firm in the UAE, and Ahsan Iqbal, who is the country’s planning minister and supervising CPEC, is a security guard of a Madina-based firm.