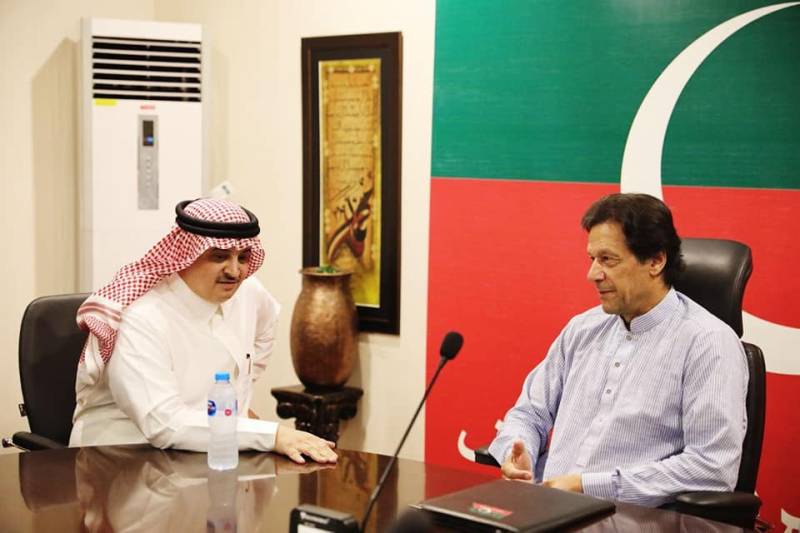 The Saudi envoy congratulated the 'PM-designate' over his win in Wednesday's polls, and vowed to work closely with new government.

Preliminary poll results released by the Election Commission of Pakistan show the PTI leading the National Assembly tally with 110 seats. As PTI workers from across the country celebrated the results, the outgoing PML-N rejected the results citing "outright rigging" and accusing officials of preventing its representatives from overseeing the count.

Imran Khan, in his first address to the nation after the election victory on Thursday, expressed his desire to forge closer ties with Saudi Arabia and neighbouring Iran.

“We want to improve ties with Iran. Saudi Arabia is a friend who has always stood by us in difficult times. Our aim will be that whatever we can do for conciliation in the Middle East, we want to play that role. Those tensions, that fight, between neighbours, we will try to bring them together,” Khan said in his address.

Earlier today, the United States (US) State Department spokesperson also congratulated the PTI chief over his party’s performance in the general elections 2018, and assured to work with the next government for improved bilateral ties.

In a statement, the US congratulated Imran Khan and guaranteed full cooperation to the next government for the purpose of mutual policy making to establish and maintain peace and stability in South Asian region. “As Pakistan’s elected leaders form a new government, the United States will look for opportunities to work with them to advance our goals of security, stability, and prosperity in South Asia,” the statement said.

It was added that strong Pak-US relations were necessary for peace and stability in the region, and that a new government is a new opportunity to strengthen ties.

In his address, Khan had emphasised on the significance of strong ties with the United States and neighbouring Afghanistan and India.