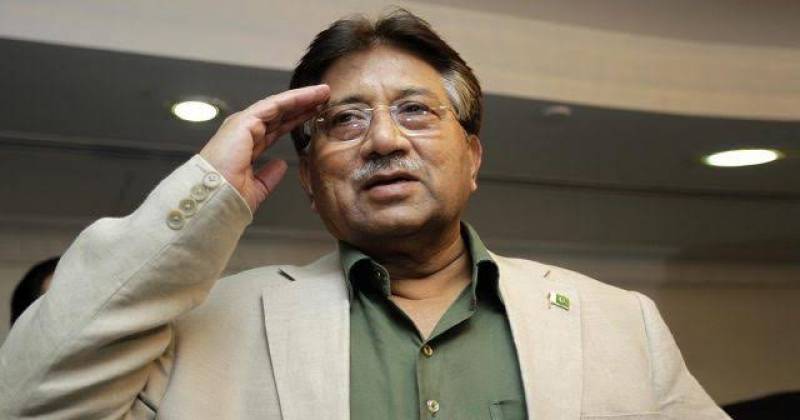 ISLAMABAD – The Islamabad High Court on Wednesday barred a Special Court from announcing its reserved against former army ruler Pervez Musharraf in high treason case, just a day before it was set to announce its judgement.

An IHC full bench comprising Justice Athar Minallah, Justice Aamer Farooq and Justice Mohsin Akhtar Kayani announced the judgment on maintainability of the petitions moved by Interior ministry and former army Chief Pervez Musharraf to set aside the special court's decision to announce its judgement in the high treason case on November 28.

The court had earlier today reserved its verdict on both Musharraf and the interior ministry's petitions.

The special court had on November 19 concluded the trial proceedings in the high treason case against Musharraf for declaring a state of emergency on November 3, 2007, and had ruled that a verdict would be announced on November 28 (tomorrow) on the basis of the available record.

The three-judge court, headed by Peshawar High Court Chief Justice Waqar Ahmed Seth, had observed that the prosecution team before being sacked had submitted detailed arguments which were sufficient to understand their point of view. The incumbent PTI government had denotified the entire prosecution team in the high treason case on Oct 24.

Yesterday, additional Attorney General (AAG) Tariq Mehmood Khokhar did not argue the petition because of his other engagements. Another AAG Sajid Ilyas Bhatti represented the interior ministry and pleaded the court for some time for preparation as he was not aware of the facts of the case.

During the hearing, according to Dawn News, the IHC bench asked AAG Bhatti if the government had notified the special court in the gazette or otherwise, he replied that since he was asked to appear before the court only on half-an-hour notice, he was not aware of the facts of the case.

On it, the court summoned the relevant record from the law secretary. The court, however, did not hear the arguments of Barrister Salman Safdar, the counsel for former army general Musharraf, observing that the court was with consistent view that an absconder could not be represented. Musharraf’s counsel said that the right of the lawyer could not be violated because of the absconding of the client.

In a surprise move, the Pakistan Tehreek-i-Insaf (PTI) government first came in aid of Musharraf, seeking deferment of the announcement of the verdict in the high treason case.

Then, in a fresh petition that was interestingly identical to an application filed by Musharraf’s lawyer, the PTI government even 'disowned' the complaint filed by the previous government against him under Article 6 (High Treason) and requested the IHC that "the special court be restrained from passing final judgement in the trial".

In the petition filed through its secretary in the IHC, the interior ministry stated that the special court's decision to reserve its verdict in the case is in violation of the Constitution because it was issued without giving the ministry the opportunity to notify a new prosecution team in the case and because the judgement is set to be passed without hearing the prosecution during the trial.

The high treason trial of the former military dictator for clamping the state of emergency on Nov 3, 2007, filed during the PML-N government, has been pending since 2013.

The former army dictator left the country in March 2016 after the interior ministry removed his name from the Exit Control List, allowed him to travel abroad for medical treatment. However, Musharraf failed to return to face the process of law and the trial court finally declared him a proclaimed offender.

He was booked in the treason case in December 2013. Musharraf was indicted on March 31, 2014, and the prosecution had tabled the entire evidence before the special court in September the same year. However, due to litigation at appellate forums, the trial of the former military dictator lingered on and he left Pakistan in March 2016 with the nod of superior courts as well as the interior ministry. Since then he has been an absconder in the case.