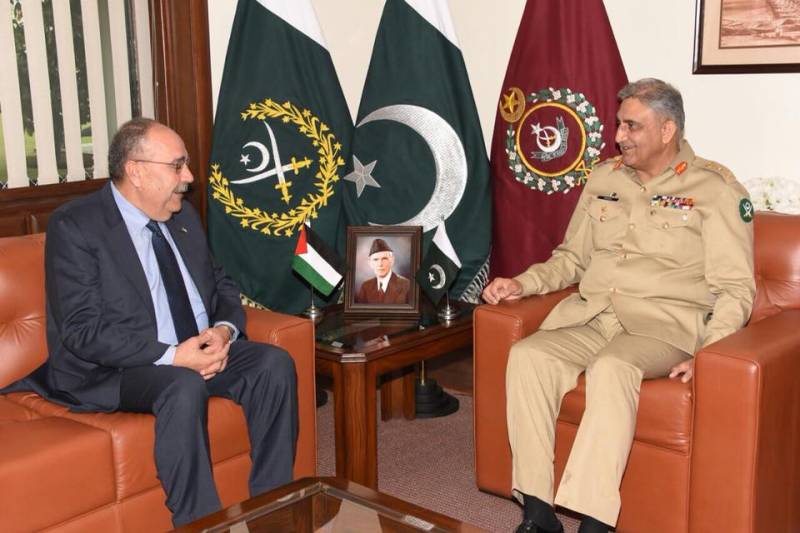 RAWALPINDI - The Army Chief General Qamar Javed Bajwa said Pakistan will continue extending support to the principled stance on Kashmir and Palestine regardless of the so-called reality of occupation.

He was talking to Ambassador of Palestine in Pakistan Walid A. M. Abu Ali, who called on him at the General Headquarters in Rawalpindi on Tuesday, the Inter-Services Public Relations (ISPR) said.

General Bajwa reassured the ambassador that Pakistan views the unresolved Palestine issue at par with the Kashmir issue.

The army chief said both issues have unequivocal public, moral and political support of the Pakistani nation. “We will continue to support the principled stance on both regardless of the so-called reality of occupation,” Gen Qamar was cited by the military’s media wing as saying.

The meeting comes after US President Donald Trump recognised Jerusalem as capital of Israel last week.

The ambassador thanked the Army Chief for Pakistan's support to the Palestinian cause.

Earlier this week, the Palestinian President Mahmoud Abbas had said that Jerusalem was the “eternal capital of the State of Palestine” in response to US President Donald Trump’s announcement that he was recognising the city as Israel’s capital.

The Saudi defence minister lauded the professional standing and performance of the Pakistan Army.