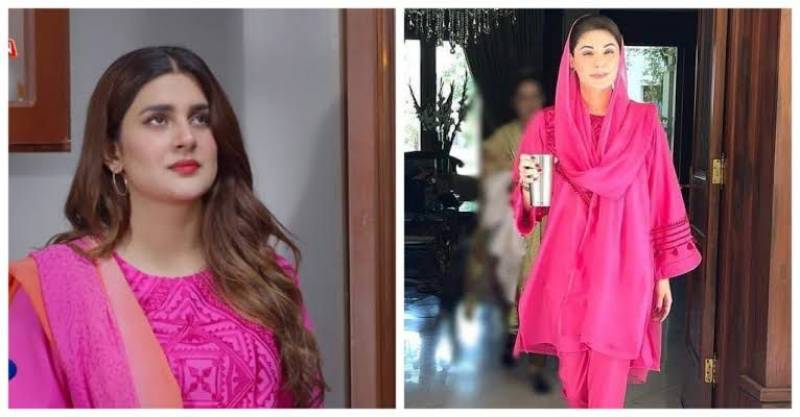 Hum Kahan Ke Sachay Thay has been winning hearts and is the centre of attention for drama buffs nowadays.

Keeping in view that the drama is a heart-rending depiction of the complexities of relationships, the audience can't help but fall in love with the complex characters in particular their fashion choices.

The two gorgeous ladies made similar yet stunning wardrobe choices recently. Although the shade of the eastern outfit varied, both looked equally beautiful.

The Alif actor is playing 'Mashal' in HKKST and the audience has been heaping praises of her spectacular portrayal of a rich spoilt brat who continues to butt heads with her cousin. During one of the episodes of this popular drama serial, Mashal donned a yellow kurta with white embroidery on top.

On the other hand, Maryam Nawaz was also spotted wearing the same outfit but in a darker shade.

Needless to say, both the gorgeous ladies looked breathtaking in the outfit and were the epitome of grace.

Hum Kahan Ke Sachay Thay has an ensemble cast of Mahira Khan, Usman Mukhtar and Kubra Khan. The drama is an avalanche of emotions and is penned by legendary writer Umera Ahmed.