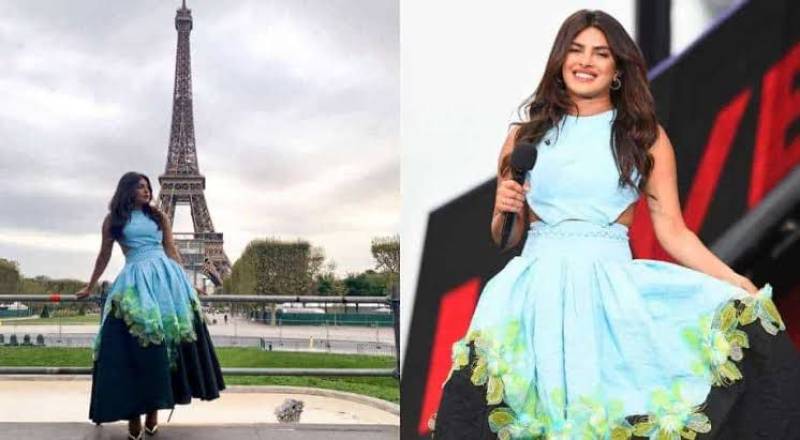 Global icon Priyanka Chopra is back in the headlines but for all the wrong reasons leaving the social media basking in hilarious memes.

As a star who prides herself in being a global citizen, Chopra gave a sneak peek into the Global Citizen Live at Paris which soon became the butt of jokes.

Shared by FilmFare, the viral video has a super thrilled Priyanka Chopra in frame swirling her camera across the backdrop featuring the Eiffel Tower. She says, “Global citizen live baby, in Paris.”

Spreading like wildfire on the internet, Pakistanis Twitterati has a lot to say and have deemed the Quantico star's enthusiasm of a "Pindi girl who visits Bahria Town Lahore".

#PriyankaChopraJonas gives netizens a sneak peek of the venue of the #GlobalCitizenFestival in Paris. pic.twitter.com/R0JtkAb4zB

On the other hand, the keyboard warriors have called the video 'cringe' and 'showoff' but the short clip is clearly a source of amusement for many.

a part of my soul goes to heaven everytime an nri rolls their r’s this hard in order to sound remotely white https://t.co/e8Hac8lM6t

It was impossible to outcringe “show me you’re an animal raaj” but piggy chops somehow managed to do that too. https://t.co/JdQBACvE2n

PC deciding which activist to take with her to the Eiffel Tower. https://t.co/9A96a6GaHf

Some people can't hold their booze..

The Global Citizen Live was a 24-hour global event that started on September 25 to unite the world to defend the planet and defeat poverty, according to its website.

Hailing from six continents, the broadcast featured artists, celebrities and world leaders coming together to create change and impact climate and poverty.

On the work front, Chopra, Katrina Kaif and Alia Bhatt will be sharing the screen for the first time in Farhan Akhtar's directorial comeback Jee Le Zaraa.

Bollywood leading ladies Priyanka Chopra, Katrina Kaif and Alia Bhatt are gearing up to steal hearts as they will be ...