LAHORE - The government of Punjab has appointed Dr Nasira Jabeen as the provisional Vice-Chancellor of the prestigious Punjab University, making her the first female head of the institute.

According to a notification issued on Friday, Dr Nasira Jabeen's appointment was made by the search committee, on the directives of Punjab Higher Education Department (HED). 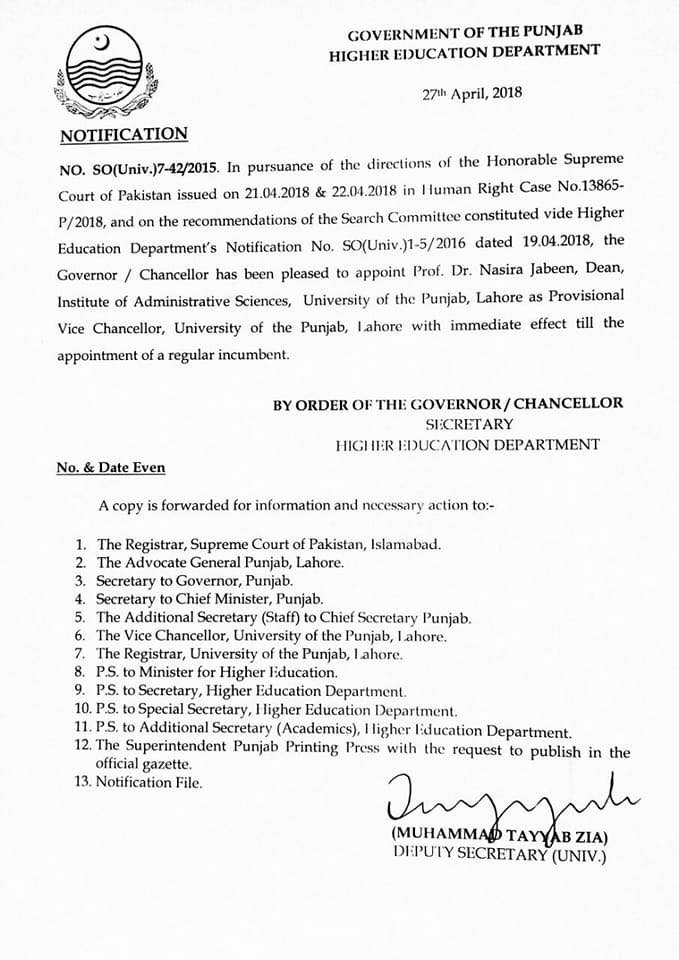 Dr Nasira Jabeen was serving as Dean Institute of Administrative Services and is the first woman to be appointed to the top slot in the 136 years history of Punjab University.

LAHORE - Supreme Court on Saturday suspended vice-chancellor (VC) of the University of Punjab on allotment of varsity ...

The Supreme Court had suspended the PU acting VC Dr Zakria Zakar on 21st April during the hearing of a case regarding the handing over of the PU’s 80-kanal land to the National Transmission and Dispatch Company (NTDC) for a grid-station.

When Dr Zakar was grilled by Chief Justice Mian Saqib Nisar,he tendered his resignation before the court.

Moreover a day after Zakir's resignation, the top judge suspended LCWU Vice-Chancellor Dr Qureshi and ordered the provincial government to form a new inquiry committee to look into allegations against Dr Qureshi’s eligibility.

Quraishi pleaded the bench not to dismiss her as it would affect her reputation but the court observed that she could plead her case afresh in front of a search committee.