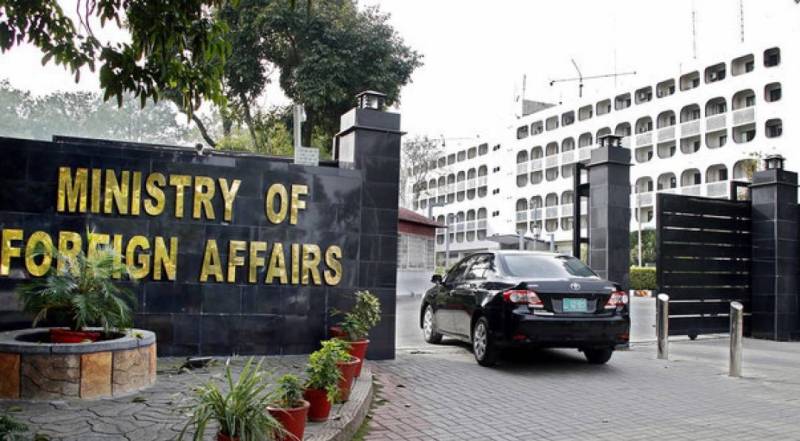 ISLAMABAD – Pakistan has summoned the charge d’affaires of the Indian high commission in Islamabad to convey its concerns over calls for violence against Muslims by Hindu seers at a three-day event held in Haridwar.

Islamabad lamented New Delhi's inaction over the matter and said it was highly reprehensible that Hindu Raksha Sena’s Prabodhanand Giri and other Hindutva figures who called for ethnic cleansing of Muslims have neither expressed any regret nor has the Indian government condemned or taken any action against them so far.

It was conveyed to the Indian diplomat that the reported hate speeches have been viewed with grave concern by the civil society and cross-section of the people of Pakistan and around the world.

“Regrettably, the toxic narrative against minorities, particularly Muslims and their persecution understate patronage has become a norm under the current Hindutva-driven BJP-RSS combine government in India”, MOFA said.

Pakistan also reminded the Indian side that such provocation by Hindutva figures including the ruling party’s elected members also preceded the anti-Muslim riots in New Delhi in February 2020.

The statement also added that “the continued grave violations of human rights of minorities, especially Muslims and their places of worship, anti-Muslim legislation by the Union Government of India and several BJP-ruled states, and continued incidents of violence against Muslims on flimsy pretexts by Hindutva groups with complete impunity and often under state patronage highlight the worsening trend of Islamophobia and present a grim picture about the fate of Muslims in India”.

NEW DELHI – Police in the northern Indian state of Uttarakhand have lodged a case after leaders of extremist ...

Pakistan also urged the international community including the United Nations, Organisation of Islamic Cooperation (OIC), and relevant human rights organisations to hold India accountable for its gross and systematic human rights violations against minorities and take immediate measures to save them from impending genocide, the statement added.

"India is expected to investigate these hate speeches and incidents of widespread violence against minorities, particularly Muslims and their houses of worship, and take measures to stop such incidents from recurring in future," the statement said.

Meanwhile, there was no response from the other side to the summoning of the diplomat by Pakistan’s Foreign Office.

Earlier, Indian law enforcers in Haridwar lodged a case after clips of the three-day Dharma Sansad held during December 17-19 caused outrage as several seers participating in the event had called for violence against minorities.

A woman leader said, "even if just a hundred of us become soldiers and kill two million of them, we will be victorious... If you stand with this attitude only then will you be able to protect sanatana dharma”.

The meeting in the northern holy city of Haridwar was attended by at least one member of Prime Minister Narendra Modi's BJP.

Hindutva leaders in India have called for the ethnic cleansing of Muslims at a recent three-day "hate speech conclave", ...