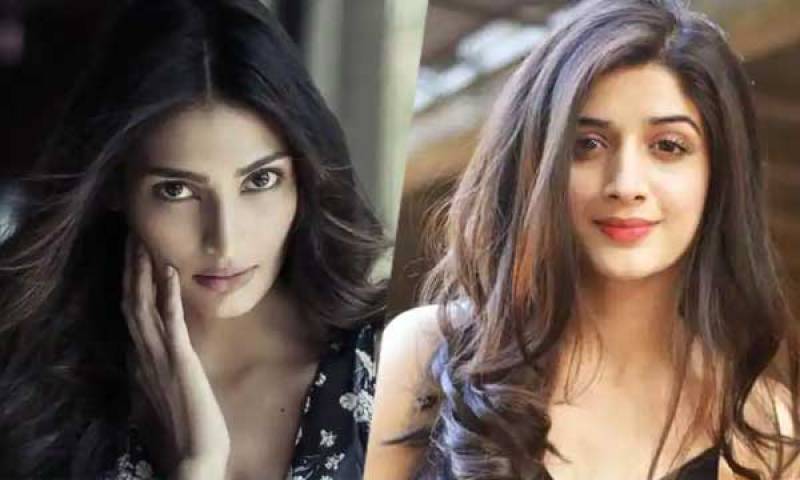 LAHORE - Bollywood stars having a huge fan following not only in India but all over the world. Pakistanis are among the die-hard fans of Indian celebs and their super-entertaining movies.

Despite the ban on Pakistani artists in Bollywood, B-Town celebs sure still have a fondness for the actors across the border and the recent Indian celebrity to express her desire to visit Pakistan is actress Athiya Shetty.

The actress not only revealed her wish of visiting Pakistan to see its beauty, Athiya also said she wants to visit Pakistani actress Mawra Hocane when she comes.

The question of her visiting Pakistan arose when the Hero actress had a Q&A session with her followers on Instagram where one of her fans asked that if she would ever visit Pakistan.

To this, Athiya replied that she’s heard Pakistan is beautiful and she would love to visit someday. 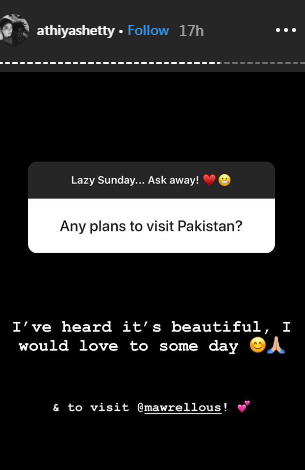 Athiya also added that she also wants to see Mawra while she visits the country. Hussain replied to the B-town celeb saying that she would love to show her around. 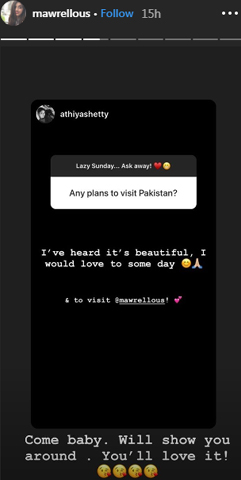 Mawra and Athiya seem to have friendly terms. Just before the release of Mawra’s Jawani Phir Nahi Ani 2, Athiya had wished good luck to the Pakistani actress for her movie debut.

This isn’t the first time a Bollywood celebrity has expressed their desire to visit the neighboring country. A few days ago, actors Arjun Kapoor, Sonam Kapoor, Rishi Kapoor had also said thst  they wished to visit Pakistan.

It’s amazing to see such admiration and desire among the international stars irrespective of the borders tensions. What is your say on this? Share with us in the comments box below.