Review of Dil-e-Nadaan ; A Farcical Farce of a Production 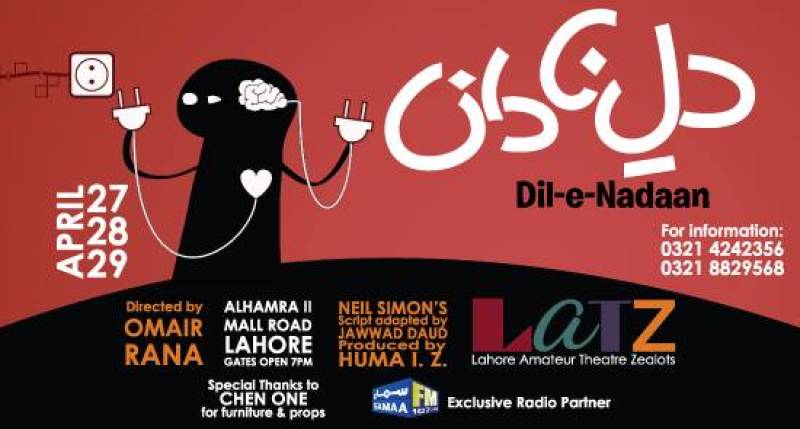 Lahore’s theater scene has been abuzz lately with the word of theater actor Omair Rana’s latest production ‘Dil e Nadan’, the play adapted, and translated from Neil Simon’s ‘The Last of Red Hot Lovers’ follows the story of a middle-aged man dealing with the trials of a midlife crisis by trying to indulge himself in an extramarital affair, but everything does not go according to plan when his encounters with to-be mistresses take an awkward turn each time. Directed by, and starring Omair Rana as the lead Yawar, the play ran for three days from 27th, to 29th May.

The show saw the Alhamra Hall 2 fill up to nearly 90% capacity, no small feat considering the play was staged after only 20 days of marketing and rehearsals.

A farcical comedy written to portray the absurdity of modern relationships, the play is Neil Simon’s satirization of the pursuit of an affair. Omair Rana’s version deviates somewhat from the original script to introduce three women easily recognizable in the Lahori social scene.

One would imagine that an actor of Rana’s stature would only associate himself with theater projects that offer the full experience of being drawn into an engaging narrative. Unfortunately, this wasn’t it.

While Rasti Farooq’s performance in the role of a hi-fi socialite in pursuit of sexual adventure was memorable, the same cannot be said of the overall impact of the play.

Sure, the production had its ‘moments’; a few laughs here and there, but it was ultimately failed by a script that was perhaps lost in translation. It was unfortunate that Jawad Daud the writer responsible for Dil e Nadan’s tired script had to resort to using trans-phobia, and rape humor to advance the comical value of the play, that too, to little effect.

Nadia, Omair and Rasti fit decently into their characters, but all of that hard work was overshadowed by the fact that they were, at times, inaudible at the back - a  criminal mistake in theater. Zainab Ahmed’s lackluster performance only served to water down, Omair Rana’s already bland fare.

Actress Nadia Afghan, who made a return to theater after a 9 year hiatus from the medium, was one of the saving graces of the play. Unengaging, tasteless, and bland, Omair Rana will not be remembered by this disaster.