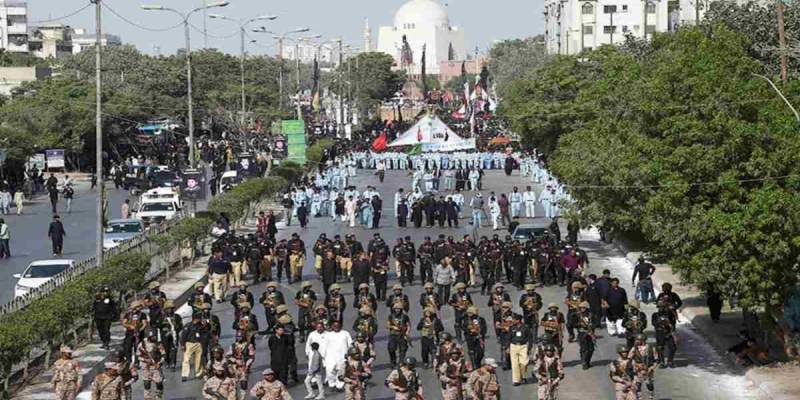 The procession was taken out from Nishtar Park and passed through MA Jinnah Road, Boulton Market and Khardar before being culminated at Kharadar's Hussainian Iranian Imambargah.

A large number of mourners including men, women, children and old age people offered Zuhren prayer during the procession.

The special security measures were adopted as all the routes leading to culmination point from Nishtar Park were sealed and movement other than procession participants remained banned.

More than 18000 policemen and a large number of Rangers personnel were deployed for security of the mourners.

According to Spokesman Karachi Police, Chief Minister Sindh Syed Murad Ali Shah took an aerial view of the procession by helicopter and he was accompanied by Inspector General (IG) Sindh, Mustaq Ahmed Mahar.

Medical camps with doctors, nurses as well as the paramedical staff had been established in a state of readiness throughout the procession route.

Water 'Sabeels' have also been established from where the mourners were provided water.

Fire brigade and other rescue providers remained on a high-alert in case any emergency arises.

In his message, Governor Sindh Imran Ismail appealed mourners to follow the standard operating procedure (SOPs) during procession and Majalis to prevent Corona.