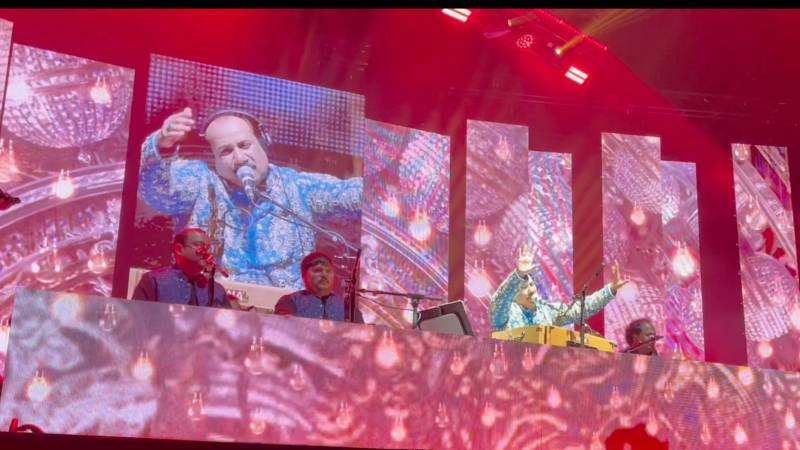 LONDON – Ustad Rahat Fateh Ali Khan delivered a mesmerising performance to a sold-out crowd at London’s O2 Arena where he appealed for funds to help the victims of floods in Pakistan.

This was Rahat Fateh Ali Khan’s third performance at the iconic London venue since he started performing globally over ten years ago after signing up exclusively with Salman Ahmed, his producer and global promoter.

Ustad Rahat Fateh Ali Khan called on Pakistan’s showbiz community to urgently come together and start raising funds for the victims of floods who have been left with nothing.

He appealed: “Pakistan is surrounded by a natural disaster of the kind and size Pakistan has never seen before. I appeal to the artist community to help those who have been left with poverty and helplessness only. They need our help.”

Nearly 20000 attended the show to the full capacity on a day when famous Indian singer Neha Kakar was performing in London just a few miles away at the Wembley Arena. Most of those who attended Rahat’s show were Indians, followed by Pakistanis and Bangladeshis.

Salman Ahmed, Rahat Fateh Ali’s producer and global promoter whose company PME manages the maestro, said he was thrilled that a milestone of ten years has been achieved, bringing glory to Pakistan and one of its biggest talents who has made a huge market from South Asia to the international stage.

He said that people keep coming back to listen to Rahat Fateh Ali Khan because of the constant variations, innovations and fusions that are produced in every tour. “We have all evolved and our relationship has grown within our team and with the audience. Look at the fusion that we add to every show for at least half of the duration. That has brought a whole new segment to our events because Ustad Rahat Fateh Ali does it so brilliantly.”

Salman added that diaspora South Asians wait for Rahat Fateh Ali Khan’s tours and keep asking for more. He said that Qawwalis were popular in all sections of Asians and Muslims, Hindus, Sikhs, Christians and others are drawn to Qawwalis to gain spiritual satisfaction and this genre is an essential element of Rahat’s shows.

He recalled how it has been a great journey working with Ustad Rahat Fateh Ali for over ten years. “We did our first concert with Ustad Rahat Fateh Ali Khan in Wembley Arena in 2012 and since then we have been selling in the UK and across the world non-stop. It's been a phenomenal journey. A lot of hard work and team effort goes into the work of managing and delivering at the global level for a global audience to the global standards. We have been successful because we work professionally and we are all on the same page,” the producer and global promoter said.

To make the journey memorable, Salman Ahmed said he was planning to launch a global tour in 2024 where Ustad Rahat Fateh Ali Khan will set a new record by playing with a 100-piece symphony orchestra. “That requires a lot of devotion and hard work, and we have already started working on that project. We will make new history and will set new precedents for South Asian music.”

Rahat Fateh Ali Khan was introduced to Bollywood in Mahesh Bhatt’s movie Paap and performed on stage for the first time in 1998 at a benefit concert in Los Angeles, and like they say, the rest is history. Rahat Fateh Ali Khan has now captured the hearts of millions worldwide and continues to mesmerise audiences with his melodious voice and Sufi music. He has had award-winning hits with films such as Dabangg, My Name is Khan, Son of Sardar and many more.

Salman Ahmed is one of the most experienced and respected Asian art promoters. His alliance with the showbiz started some 34 years ago when he started organizing Bhangra nights and small British Asian concerts. That was the time when British Asian singers had started making their mark. The BBC covered one of Salman’s first concerts at the time. There was no social media and no Asian channels around. The BBC aired a report then to showcase how the second generation of British Asians was growing with a fusion of British and Asian culture.