"No way I am going to do an event with her," how Shahrukh Khan gave a cold shoulder to Mahira 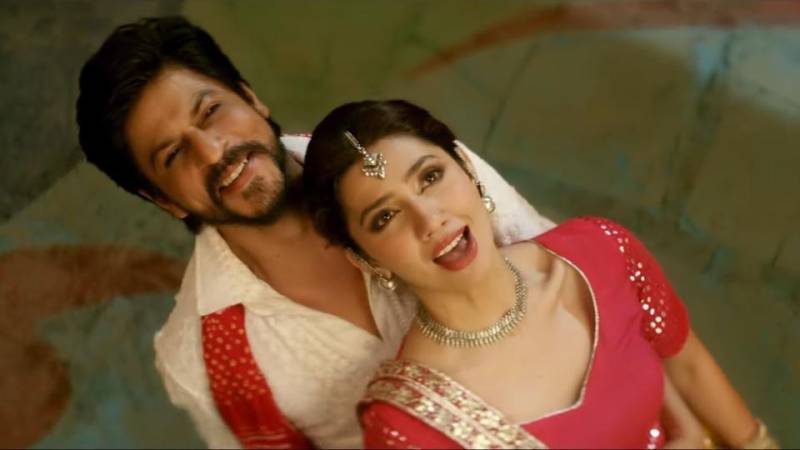 LAHORE - It seems as if Shah Rukh Khan is going back on his own words when it comes to his Raees leading lady Mahira Khan, as sources inform us that it was due to King Khan's intervention that Mahira is not part of the promotions for the film alongside Shah Rukh Khan.

Pakistani actress Mahira Khan became the envy of the Pakistani film industry when she was selected to play the female lead opposite none other than Shah Rukh Khan in Raees - the first Pakistani actress to be paired with the Bollywood superstar!

Shah Rukh seemed to be all praise for Mahira Khan, with Indian and Pakistani newspapers quoting him as saying that she was a very talented actress and that it was a pleasure to work with her. In a 2015 interview with the Indian Express, Shah Rukh called Mahira an "accomplished" actor, adding: "She suited the film a lot. I have seen a little bit part of her television stuff. I have met her and she is marvellous actor." He even went so far as to quip that “Now I would have to excel and perform like (her).”

But as relations deteriorated between the South Asian neighbours in late 2016, it seems like Shah Rukh has changed his tune completely.

Following the Uri incident, the Indian extremist party MNS which is led by Raj Thackeray threatened filmmakers and distributors of dire consequences if Pakistani actors continued working in Bollywood.

As a result of the controversy, Mahira was not even allowed to participate in the promotional events for the film alongside Shah Rukh Khan, and had to attend some promotional events alone. She expressed her disappointment and said, "I am the first Pakistani actress who got the opportunity to work with Shah Rukh Khan as the main lead. But I feel that my success and fame has come under the evil eye due to which my film has not been able to release in Pakistan."

"I also want to promote the film. I also want to be in an interview with Shah Rukh Khan talking about it. Why not? Why is it I get told that that's asking for too much? It isn't! It is my right. This was also my film."

Mahira had also added, "Of course, I feel bad. When you put so much effort and hard work in a project, you wish to see the results. I work with the same dedication and zeal in all my projects."

However, sources close to the film's promoters have disclosed to Daily Pakistan that Mahira's exclusion was due to none other than Shah Rukh Khan himself.

We have been told that Shah Rukh Khan was the one who completely refused to do any promotional events for Raees with Mahira saying, "No way I am going to do an event with her. For me, it is my country first and I don't want to work with her anymore and involve myself in further controversy." Given King Khan's clout in Bollywood, it is little surprise that Mahira was sidelined based on his say-so.

We have also learnt that, even though Shah Rukh Khan went all out to praise Mahira in public, his attitude behind the scenes was completely different.

Shah Rukh, who is known for his decades-old 'arms opening' signature step, apparently humiliated Mahira for dancing in typical desi Pakistani 'wedding' style. "This is Bollywood, and not Pakistan. Shaadi dance is not Bollywood's thing," Shah Rukh told her - and, according to our sources, he wasn't exactly polite about it!

We're seriously beginning to wonder what Mahira meant when she told The Indian Express only a few days ago: “He (Shah Rukh Khan) used to tell me to do things this way, do it that way. At one point I asked him, am I not doing it right? He said ‘Look I am only telling you what I know, from my experience. You do it your way but all I want is when you see yourself on screen you don’t come to me and say, why didn’t you tell me!’"