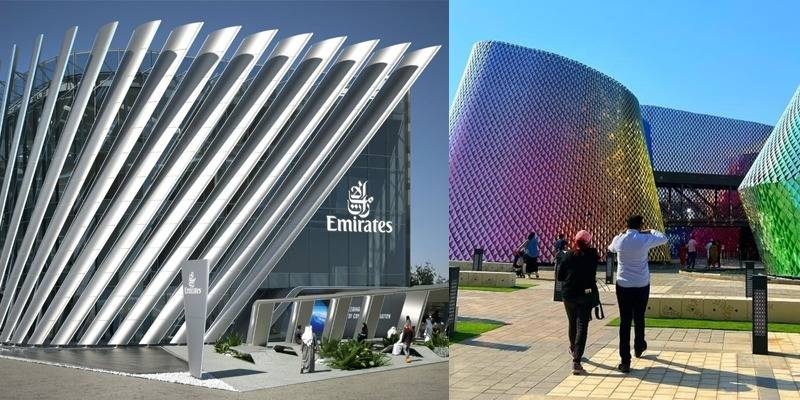 DUBAI - Dubai Expo 2020 is the world’s biggest trade show of the decade unlocking remarkable achievements and unlimited opportunities for businesses and the global economy.

The mega event has established history with deals of billions of dollars signed between corporations and countries and attracted over 16 million visitors from various countries including businessmen, trade delegations, technology wizards, innovative minds, venture capitalists, starters, and tourists.

The contribution of the Dubai Expo 2020 to reinvigorate the global economy is immense which has apparently reached a point of dead slow due to the Covid-19 that engulfed the whole world including daily life and socio-economic activities.

There are 200 pavilions at Dubai Expo 2020 representing various countries and companies to showcase their respective potential and contribution to the global socio-economy. These pavilions presented the best form of their cultural heritage as well as innovative and technological landscapes of their respective territories making the expo a mini global village for its visitors.

Here are the reviews of the two most-visited pavilions of Dubai Expo 2020 which garnered immense attention from the visitors at the biggest trade fair in the world.

Pakistan Pavilion under the theme “Pakistan: The Hidden Treasure” attracted over 1 million visitors milestone crossed during the five months with billions of dollars in investment deals signed between states, and corporations.

The pavilion displayed the world’s largest Quran within its vicinity, exhibiting its religious values along with artistic talent.

The unveiling of a part of the world's largest copy of the Holy Quran at the Dubai Expo 2020 attracted a large crowd outside the Pakistan Pavilion as visitors flocked to see the one-of-its-kind project.

Attracting business and investment opportunities is the core objective of the Dubai Expo 2020, and Pakistan’s pavilion has grabbed a series of promising deals so far in the trade fair. Among the most notable deals were signed in January as 44 foreign companies expressed their interest to invest in different sectors of Pakistan (Khyber Pakhtunkhwa) to the tune of $8 billion.

Twenty-five of these MoUs, worth $2 billion, were signed by the government of Gilgit Baltistan at the GB Investment Conference, which took place on the sidelines of the expo. As for Punjab, UAE's Dhabi Group has said it will invest more than Rs60 billion in a construction project, while an agreement was signed with Nokia to launch a smart city pilot.

According to the organiser, there were 250 events organised at the pavilion in Pakistan mainly in the area of business and investment as more than 100 Memorandums of Understanding were signed.

One of the biggest carriers in the world, the official airline, and the flying partner of the majority of visitors at Dubai Expo 2020, Emirates also welcomes nationals of various countries at its state-of-art pavilion.

The pavilion showcased the futuristic technologies in the aviation sector bringing a real-time traveling experience to their customers at the pavilion which pleasantly surprised the visitors and tourists about the evolution of the airline industry.

The journey begins by collecting a ‘seed’ that unpacks each experience. The seed enables a truly nuanced journey through the pavilion, capturing the visitor’s interactions, knowledge, and experiences, which will then be played back in the multi-sensory finale.

Visitors stepped into the laboratory of the future to run experiments carried out by robotic arms, which demonstrate the technologies that will make the aircraft of the future faster, lighter and stronger.

Interactive screens delivered a series of animations that explore future engine and fuel technologies like hypersonic, hydrogen, hybrid, and electric, highlighting the impact they will have on emissions, sustainability, comfort, and speed, featuring realistic aircraft engine models.

Visitors put their knowledge to the test and design and fly their own personalised, futuristic aircraft. Through an ultra-haptic interface, visitors will build their aircraft using elements like range, type of engine, wings, and livery, run it through a flight simulator, and get instant feedback on their design decisions.

Emirates visualizes the airport of the future for visitors to learn how biometrics, data analytics, and smart technologies will transform the passenger experience on the ground.

Visitors are able to fully immerse themselves by donning interactive Virtual Reality headsets that allow them to explore aircraft interior cabins of the future. They are able to navigate a virtual fuselage’s interactive windows, go windowless, and even see different types of cabins and seating configurations.

The full Emirates Pavilion experience culminates in a personalized 360° multi-sensory cinematic presentation that combines dynamic storytelling and stunning 3D motions graphics with the information captured during the tour.

As the world is reopening to a normal pre-covid 19 level, the aviation sector will witness a high volume of traffic with pent-up demand for air travel across the world. In this scenario, airlines with innovative and high-tech comfort levels could attract more passengers across the world, setting up a new dimension of ranking and competition in the aviation world.

Emirates with a futuristic roadmap will lead the aviation industry as many of the airlines will face competition albeit a struggle for survival if these are not updated to the new emerging trends.