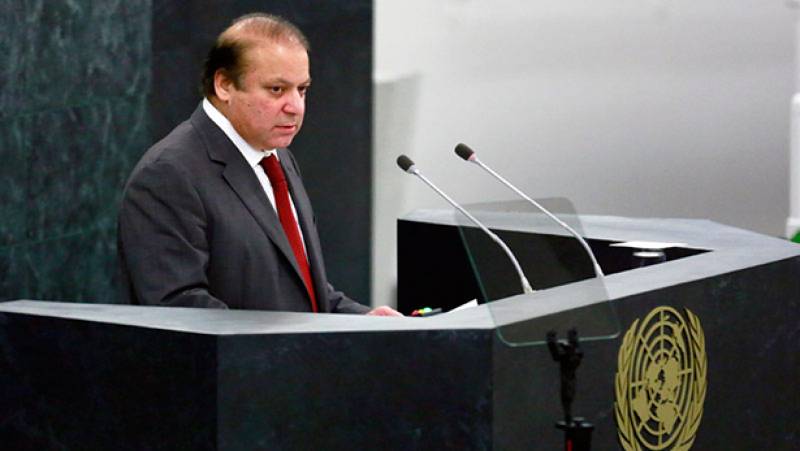 LAHORE (Staff Report) - While Prime Minister Nawaz Sharif's speech at 70th session of United Nations General Assembly has triggered a new debate on Pakistan-India relationship in which he proposed a four-pint agenda to hold bilateral dialogue with India, another question has also arisen on the scene whether he has committed contempt of court or not by addressing in English language instead of Urdu which is official language of Pakistan by law.

All of the Pakistani prime ministers and other representatives so far have been delivering speeches in English language at UN but the Prime Minister Nawaz Sharif was clearly ordered by Supreme Court of Pakistan to address in Urdu language no matter inside or outside country.

In July this year, the apex court moved to direct the president of Pakistan, prime minister, federal ministers and all public office holders to deliver speeches in Urdu language-whether inside or outside the country.

The order was given by a three member bench of superior court which was headed by former Chief Justice of Pakistan Jawad S. Khawaja, who retired earlier this month.

The order further instructed the government to translate all of the public related documents into Urdu language in the earliest period of three months.

Moreover the prime minister had also issued a circular to all ministries which asked them to take measurements to implement Urdu as official language of Pakistan in the light of order given by the honourable court.

Despite all this, Prime Minister Nawaz Sharif has addressed the UN General Assembly and other ceremonies during his recent visit to United States in English language, which raises serious question whether the premier has committed a contempt of court crime or not and furthermore will he be tried for this or not?

It is also pertinent to be mentioned here that former Prime Minister Yousaf Raza Gillani was deprived of his office when former Chief Justice Iftikhar Muhammad Chaudhry tried him under the charges of contempt of court for not obeying the court orders in NRO implementation case.