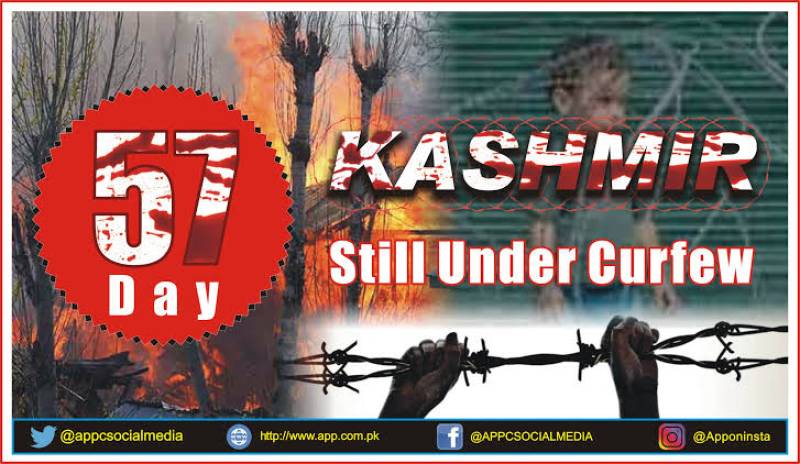 ISLAMABAD - Indian military siege entered the 57th day in occupied Kashmir, Monday with all main markets continue to remain shut, public transport off the roads and schools and offices deserted as no one is heeding the calls of authorities to return to work.

What is adding to the people’s miseries is continued suspension of the internet and mobile phones, virtually cutting the Kashmir valley and Muslim-majority areas of Jammu region from the outside world, Kashmir Media Service reported.

As winter draws closer, Indian paramilitary forces are asking the residents living in various localities of Srinagar city especially the downtown areas to rent their properties to the forces’ personnel, posted in the Valley.

The residents said that when they refused to do so they were harassed and asked to vacate their homes immediately. Tens of thousands of paramilitary personnel, including members of the CRPF and the BSF, were deployed in the Valley in the days preceding the Modi government’s move to scrap Article 370 on August 5.

Meanwhile, Indian forces have intensified restrictions in the name of surveillance and area domination operations in the Kashmir valley and Muslim majority areas in Jammu region on the 57th consecutive day, Monday. Security has been beefed up around vital installations including the Srinagar airport and district police offices. Additional security bunkers are being constructed in the Srinagar city and elsewhere in the valley.

For the first time in the Jammu region, posters have surfaced at various places in Mendhar town of Poonch district reaffirming the people’s resolve to continue freedom struggle against India’s illegal occupation. The one-page Urdu posters on behalf of Hurriyat activists were pasted at several places in Mendhar town.