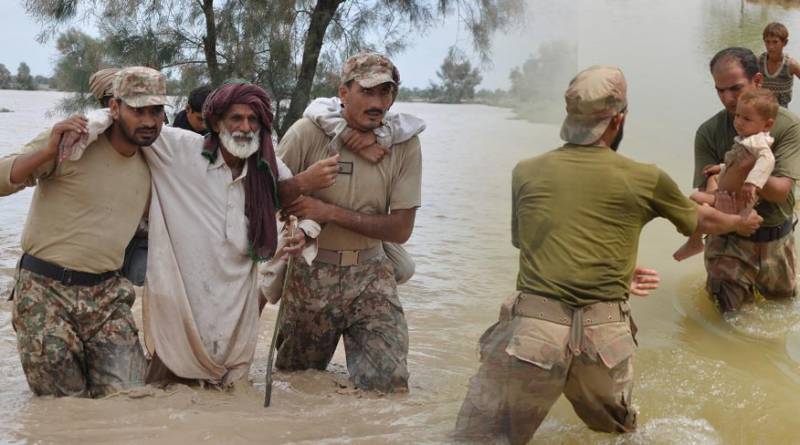 RAWALPINDI – Pakistani military personnel are playing a leading role in relief operations after heavy monsoon spells and floods pummeled parts of the country and at least 127 people have so far been confirmed dead due to flood-related incidents.

In a press release, the Inter-Services Public Relations said Pakistan Army and Frontier Corps troops continue to engage in rescue and relief efforts in the flood-hit areas of the country and are busy in repair work on highways and motorways to restore connectivity.

The military’s media wing said all rivers are flowing normally except for a low flood in the Indus River at Attock, Tarbela, Chashma, and Guddu. It added that a low flood was also reported at Warsak and a medium flood at Nowshehra in the Kabul River.

It also informed that all rivers across Pakistan are flowing normally, except the Indus which is at a low flood in Attock, Tarbela, Chashma and Guddu.

All hill torrents are flowing normally except in South Punjab except for some increased flow in Mithawan, Kaha, and Sanghar Hill torrents.

Meanwhile, local commanders visited Rajanpur and DG Khan where relief items were distributed among flood affectees and medical camps have been established, the press release added.

With more recent monsoons spell gusts bearing down on the country, the death toll rose to 127 across Balochistan as rescue workers found seven more dead bodies. ISPR however said complete connectivity of Gandhawa has been restored, ISPR said

There is no longer any isolated area in Gandhawa and its surroundings, the military's media wing said, adding that further relief activities are underway.

In Chaman district, no rain was reported and Bab-e-Dosti at the Pak-Afghan border is "fully functional", said the ISPR.

Meanwhile, armed forces personnel also carried out operations in Gilgit-Baltistan. ISPR said two mudslides were reported near Sikandarabad at Karakoram Highway however the road has been opened for one-way traffic by FWO.

Sindh and Balochistan provinces remained the worst hit regions where hundreds of people died in rain-related incidents and subsequent flooding. The country of nearly 221 million struggles with the annual monsoons each year.