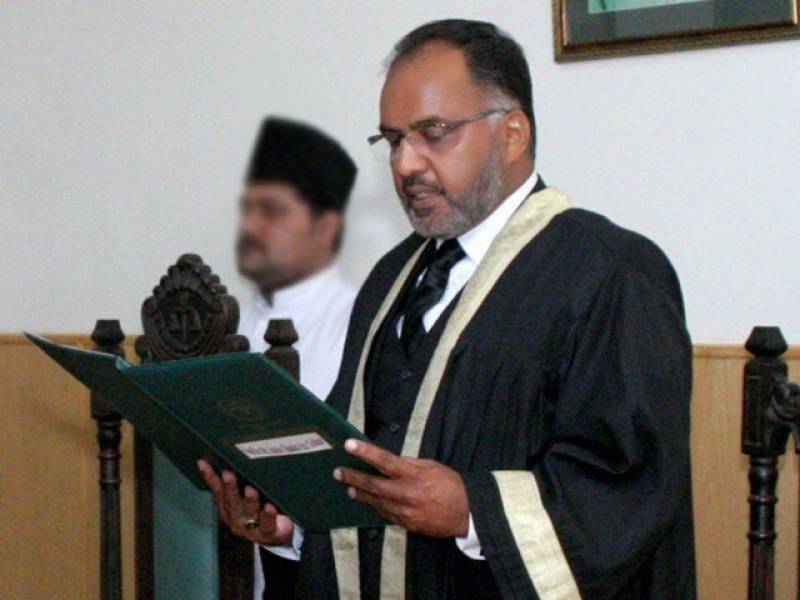 ISLAMABAD - The Supreme Judicial Council has issued a show cause notice to Justice Shaukat Siddiqui of Islamabad High Court for one of his speeches with a special reference to the country's top spy agency, made last month.

The notice was issued regarding the address of the honorable judge to the Rawalpindi Bar Association in which Siddiqui had decried the involvement of spy officers in judicial affairs.

The judge has been asked to submit a response by August 28.

In his bombshell address to his junior fellows, Justice Siddiqui alleged that officers of Pakistan’s premier spy agency, the Inter-Services Intelligence (ISI), were directly involved in manipulating the judicial affairs in the country.

ISLAMABAD - The Supreme Judicial Council (SJC) adjourned the hearing of a reference against Justice Shaukat Siddiqui of ...

“I don’t know what will happen tomorrow but I swear on my mother and this Bar that ISI officials instruct the judges to constitute the bench of their own choice,” the judge claimed.

“My chief justice was asked not to include justice Shaukat in the bench to which my chief replied ‘don’t worry we will form the bench as per your wishes’,” he maintained.

In the video, the judge can be heard saying that he knew where the proceedings of accountability courts were going and ‘who’ goes to the Supreme Court with a message from ‘someone’, in an unveiled reference to the spy agency.

“Why the administrative control of IHC has no rule over the Accountability Courts,” he questioned.

“We are not independent and our institution is in the hands of those carrying guns,” he continued.

Justice Siddiqui went on to assert that he did not care about his job and he was conveyed that all references against him would be removed if he accepted the terms.

The IHC judge told the lawyers that he was even offered the post of Islamabad High Court (IHC) Chief Justice.

'For a while now, I have been wanting to present myself before the bar for accountability. I wanted to do that because only this bar can hold me accountable and I face no corruption charges,' he said.

“Whenever I pass a judgment in a crucial case, a group starts malicious campaign claiming that there are corruption references ongoing against me,” he added.

Justice Siddiqui also made headlines last year when he criticised the armed forces for their role as the “mediator” in the agreement that led to an end of the sit-in by religious groups at Islamabad’s Faizabad Interchange in November.

“Who is the army to adopt a mediator’s role?” the judge had questioned at the time. “Where does the law assign this role to a major general?”

The Islamabad High Court Judge is already facing a probe by the Supreme Judicial Council regarding the expenses incurred on the renovation of official residence.