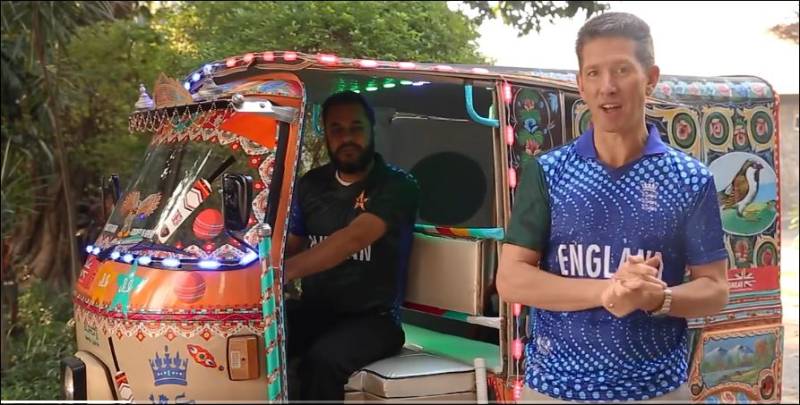 ISLAMABAD – As the historic first Test between Pakistan and England continued in Rawalpindi despite virus scare, British High Commissioner to Pak Christian Turner, reached Rawalpindi Cricket Stadium in a colorful tuktuk to watch the much-anticipated game.

British diplomat Christian Turner enjoyed colorful and vivacious rickshaw as he enjoyed the desi cultural experience in Pakistani style while enjoying the game being played between two sides after an extended gap of 17 years.

Turner, 50, shared a clip while donning a Pakistan-England jersey to support both teams. He surprised everyone by speaking Urdu and Pothohari languages.

Sharing his thoughts in Urdu, he said Pakistan and England have reached new heights in the cricket world. Recalling England's triumph in previous encounters of the T20 World cup, he said it’s time to watch the action in a long format.

Speaking with the rickshaw driver he “Raja Ji, let’s go to Pindi stadium to watch the match,” before hopping into the three-wheeler.

The clip amassed thousands of likes in a few hours and is being shared on other social sites.