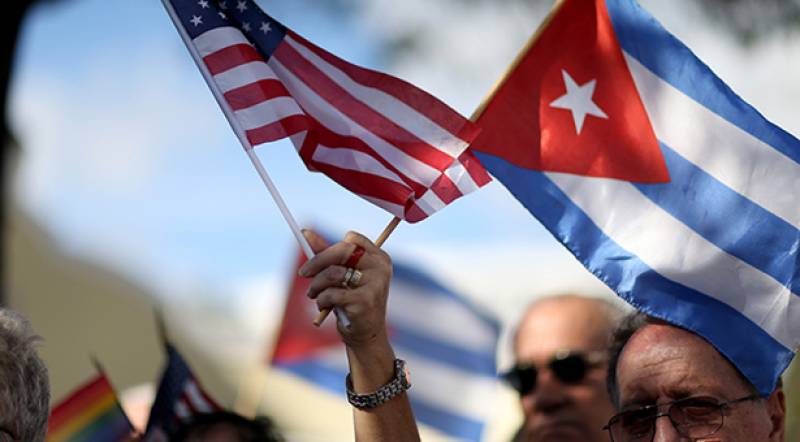 WASHINGTON( APP) - The United States and Cuba have reached an agreement to reopen embassies in Washington and Havana.

“We will formally announce tomorrow that the United States and Cuba have reached an agreement to re-establish formal diplomatic relations and open embassies in each other´s capitals,” a source said.

US President Barack Obama is expected to issue a statement at 11:00 am (1500 GMT) in the White House Rose Garden about the deal, which constitutes one of the major foreign policy achievements of his presidency.

Diplomatic ties have been frozen for five decades.

From the Bay of Pigs invasion to the Cuban Missile Crisis, antagonism across the narrow Straits of Florida often threatened to turn the Cold War hot.

But after 18 months of secret negotiations by aides, Obama and Cuban President Raul Castro agreed in December to restore relations. The pair held a historic first meeting in Panama in April.

In May, the United States paved the way for rapprochement by taking Cuba off the list of state sponsors of terrorism.

Havana had vehemently protested its 1982 inclusion on the blacklist, which hampered its access to global markets.

Polls show a majority of Americans support Obama´s efforts to improve ties. But the island is still subject to a US trade embargo put in place in 1962. There is fierce opposition to lifting the embargo from Republican lawmakers.

In the meantime, other vestiges of ideological animosity are rapidly receding into history.

Travel and communications restrictions between the two countries have been significantly eased. An American orchestra has toured Cuba for the first time in decades, and Airbnb has even established a foothold on the Communist Party-ruled Caribbean Island.

The White House has said that a presidential visit is possible before Obama leaves office in 2017. Latin American allies have hailed thawing US-Cuba ties as transformative for Washington´s role in the region.

“It is really about putting an end to the last lingering vestiges of the Cold War, and it ultimately elevates the level of the relations between the US and the entire region,” she said.

She described Obama´s move as a “gesture to all of Latin America and also to world peace at large. It is an important example of relations to be followed.”