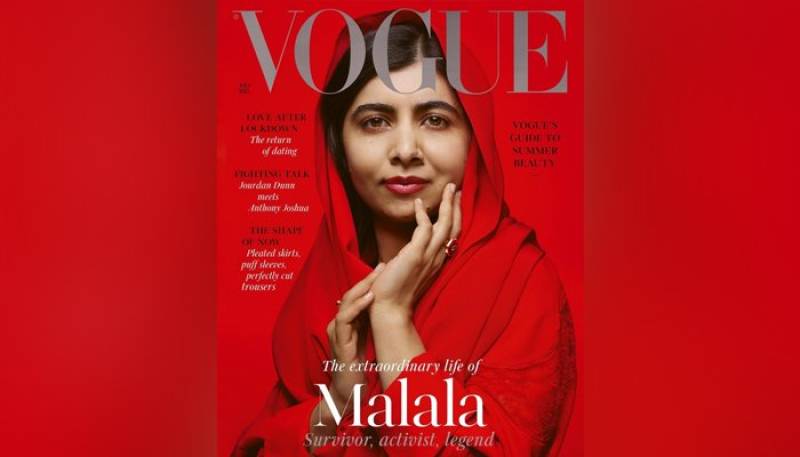 Pakistani girls education activist Malala Yousufzai will feature on the cover page of the July 2021 edition of the British magazine Vogue.

Editor-in-Chief Edward Enninful announced it on Instagram with a long note, wherein he calls her an “Activist, author, tireless campaigner for girls education, daughter, sister, student and survivor."

The Nobel prize laureate can be seen putting on red dress in the cover photo, which has been captured by British fashion photographer Nick Knight.

Edward Enninful began the note as, "When it comes to people I admire, Malala Yousafzai is right at the top".

"At 23, the world’s most famous university graduate has already lived so many lives. Activist, author, tireless campaigner for girls’ education, daughter, sister, student and survivor," he added.

It’s hard to believe it was only a decade ago that she was a young teenager with a passion for learning, living in Pakistan’s Swat Valley, blogging about her experience for the BBC and giving a voice to girls denied the right to learn.

“A near-fatal attempt on her life in 2012 – or what she calls “the incident” – brought her to Britain for specialist surgery. But she didn’t stop there,” he added.

“In the July 2021 issue of @BritishVogue, she speaks to @Sirin_Kale about everything from her post-uni wobbles to her move into TV production and her eloquent thoughts on wearing the headscarf – and even her trepidation about love and relationships. A new side to Malala is revealed. I hope you all love getting to know this extraordinary person as much as we did. See the full story in the new issue, on newsstands Friday 4 June. And click the link in my bio to read the interview in full,” he concluded.

LONDON – Pakistan’s social activist and Nobel laureate Malala Yousafzai will be among the 15 celebrity ...