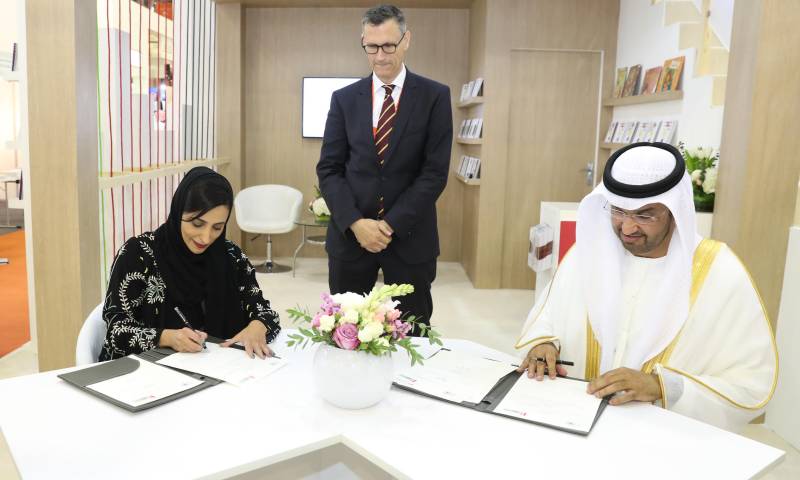 SHARJAH - The Emirates Publishers Association (EPA) has signed a Memorandum of Understanding with National Media Council (NMC) to elevate the UAE’s publishing sector and provide more services and facilities to authors and publishers.

The MoU was signed on the sidelines of the 36th edition of SIBF, which was inaugurated at Expo Centre Sharjah, in the presence of Noura Al Kaabi, UAE Minister of Culture and Knowledge Development; Dr Michael Kolman, President of the International Publishers Association (IPA); Mansour Al Mansouri, Director General of NMC; and Rashid Al Kous, Executive Director of EPA.

The proceedings were attended by EPA board members and several Emirati and Arab publishers.

The MoU is aimed to strengthen partnership and cooperation between the two bodies and help streamline the efforts of government departments in contributing to the development of the UAE’s publishing sector.

Under the terms of the agreement, the two organisations will collaborate to ensure that the region’s cultural accomplishments reach as wide an audience as possible. NMC will play a major role in supporting and equipping EPA’s member publishers to carry out their operations effectively, stay connected with stakeholders, and improve their marketing and distribution channels for the furtherance of a knowledge-based society.

Commenting on the agreement, Sheikha Bodour Al Qasimi said: “The EPA is dedicated to overcoming obstacles facing UAE-based and regional publishers and aims to assist them in the creation of outstanding literary and creative products that will attract readers. Our role also sees us helping publishers expand regionally and internationally, thereby increasing the competitiveness of the UAE’s publishing sector and allowing it to make a bigger impact culturally and economically.”

She added: “Achieving this will require concerted efforts and strong collaboration between all actors in the sector, including publishing houses, distribution companies, authors, illustrators, and translators, as well as official institutions representing creative sectors. The MoU signing with NMC signals a big step in this direction.”

Dr Sultan bin Ahmad Al Jaber said: “This MoU underpins our commitment to communicate directly with publishers and to nurture the cultural and intellectual sphere. It forms part of our avowed aim to further the development of the publishing industry in line with the vision of the wise leadership that seeks to foster reading as a way of life. The signing of the agreement on the sidelines of SIBF underscores the importance of books as the main medium for promoting knowledge, science, and culture.”

“We appreciate Sharjah’s continuous efforts led by His Highness Sheikh Dr Sultan bin Muhammad Al Qasimi, Member of the Supreme Council Ruler of Sharjah, to launch initiatives that support publishing and books. We are confident that pioneering initiatives such as Sharjah Publishing City, the first publishing free zone in the Arab world, will enhance the UAE’s position as a global cultural hub and a destination for authors and intellectuals from around the world,” he noted.

The MoU also outlines the need to develop a joint mechanism for the classification of UAE-based publishing houses, depending on their genres, goals and target readership segments, to ensure the availability of a reliable database that monitors growth rates achieved by the sector.

The EPA was founded in 2009 as an initiative by Sheikha Bodour Al Qasimi to serve and develop the publishing sector in the UAE and to advance the role of Emirati publishers through the provision of training and mentorship programmes.