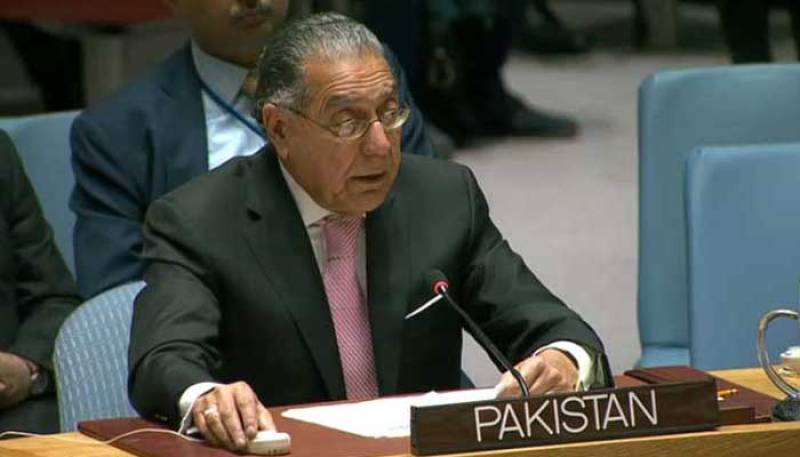 NEW YORK – Ambassador and Permanent Representative of Pakistan to the United Nations (UN) Munir Akram has said that the Security Council’s efforts on terrorism, fascism, colonialism require significant reform adding that the council has focused on combating Al-Qaeda and ISIS while ignoring terrorism by extremist & fascist Hindutva groups terrorizing Muslims.

The Ambassador stated that “During the last year, the Council has met thrice on the J&K issue. The meetings have confirmed the illegality of Indian action of 5 Aug 2019, reaffirmed the disputed status of the territory, and underscored the imperative for a peaceful settlement of the dispute in accordance with SC resolutions”: he reiterated.

Noting further that SC resolution implementation is generally lacking in several global regions, the Ambassador said that the “Council has been found “wanting” in the implementation of its own resolutions and decisions, including on J&K while sanctions committees require greater transparency”.

Ambassador Munir Akram insisted that, the Council should resolve the dispute over Kashmir to make a larger point of how SC credibility is compromised when its resolutions are not enforced.

“For over 70 years, India has perpetrated a reign of terror in the occupied territory with 900,000 troops; 8 million Kashmir has been placed under a complete siege, he said.

The Ambassador added that “The BJP-RSS government is putting in place what they have themselves called the “Final Solution” in occupied Kashmir”. Demographic flooding in occupied Kashmir by settler communities is meant to disempower and disenfranchise the Kashmiri people and to obliterate their Muslim identity, he said.

Munir Akram concluded that “The international community cannot succeed in its efforts to strengthen conflict prevention and promote the peaceful settlement of disputes if its own resolutions are willfully held in abeyance by some”.