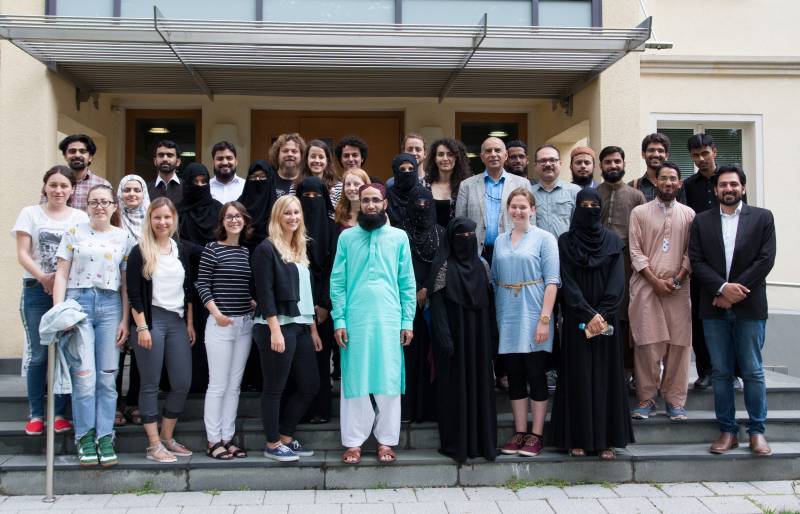 BERLIN - Students dressed in Pakistani Islamic attire sitting with the German students in one of the oldest university of Germany and attending sessions from highly competent faculty is not something very usual in the West. The Chair of Muslim Cultural & Religious History (CMCRH) at the University of Erfurt holds 10-day interactive workshop on the topic of "Human Rights & Contribution of Religions".

The workshop invited students of ten madrasas belonging to major schools of thought along with the students of Erfurt University in which they discussed the entanglement of cultural, historical, political, ethnic and of course religious factors that contribute to the recognition and implementation of universal human rights. Both madrasa and university students exchanged their ideas and conducted joint presentations about the topic.

While talking to the news correspondent, the guardian of these students Mufti Abdullah Noorani said that this type of exposure for the madrasa students is very new and proving very beneficial. He further added that, “all the students are participating in the session very enthusiastically”.

This sort of exercises will broaden their canvas and it will also create sense of pluralism, he further added. Sohail Ahmed, a student of from Jamia Binoria Karachi, talking to the news correspondent added that this workshop has provided him a different perspective and the lens from where he used to see the things. He further concluded that being in a German university is a unique opportunity whereas this workshop gives us lesson to the concept of let’s agree to disagree by respecting otherness.

Another female madrassa student namely Nisar Fatima from Jamia Sirajia Naeemia Lahore expressed her excitement of this great learning experience and shared her thoughts that the stay in Germany has inspired her at different levels. “I can smell the true spirit of Islam that is based on peace and human rights here in Germany”, she said. Furthermore, she hoped that upon her return she will also share new educational didactics with her fellow madrasa students.

The Chair of Muslim Cultural and Religious History, Prof. Dr. Jamal Malik while talking to the news correspondent shared his thoughts about the idea of inviting madrasa students in Europe is to not only share the social values being practiced by the Europeans but the West can also learn from the vast knowledge repository that exists in the madrasa curriculum. Professor Malik is world renowned scholar of Muslim religious history and he is among the first scholars to contribute a seminal work on madrasas in Pakistan.

In 2016, we also invited heads of different leading madrasas of Pakistan here at Erfurt University and shared the idea of organizing such workshops for their students, he added. We proposed and discussed the rationale and contents of workshops to which all the religious seminaries agreed. We have seen a huge impact of such workshops on the attendees as they were not exposed to such academic environment, Prof. Malik elaborated. He was of the view that these students gain confidence to speak in front of international students and as a part of this exercise, upon their return they conduct the similar workshops in their own madrasas which are jointly supervised by participating madrasas and the University of Erfurt. Prof. Malik is convinced that conducting such experience and exercise will bring peace, management of the disagreement, sectarian diversity and respect for religious pluralism.

This year’s workshop took place from 09-18 July and focused on how “world religions” have influenced and inspired values of social justice, human rights and peace ethics. Different theoretical perspectives were discussed in order to study the entanglement of cultural, historical, political, ethnic and of course religious factors that contribute to the recognition and implementation of universal human rights.