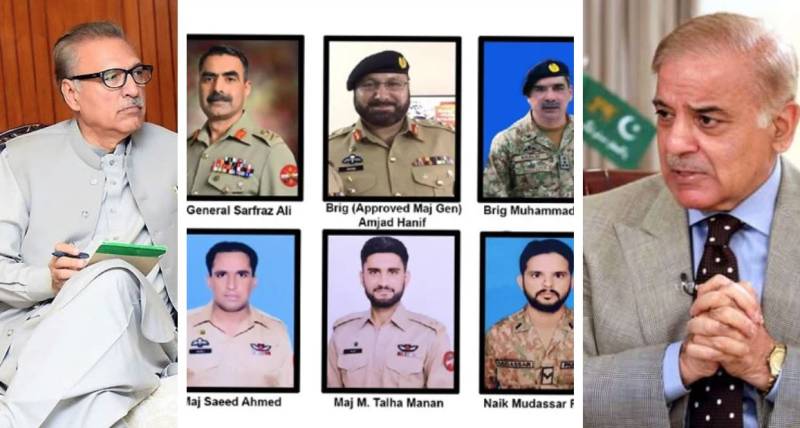 ISLAMABAD – President Dr Arif Alvi, Prime Minister Shehbaz Sharif and other Pakistani politicians expressed their deep grief and sorrow over the martyrdom of officers and soldiers in helicopter crash.

President also prayed for the highest rank for the martyrs and expressed sympathies with the bereaved families.

Army officers were martyred while performing their duties and serving the nation with great zeal, hard work and dedication, Alvi added.

In a separate message, the premier Shehbaz Sharif also expressed his grief over the martyrdom of the military officials, saying the entire nation salutes the deceased members.

Expressing his condolence and sympathies with the bereaved families, PM said these sons of the soil were the pride of the nation who laid down their lives while saving the countrymen trapped in floods in Balochistan province.

Former PM and PTI chief Imran Khan also responded to the development. Tragic news about the army aviation helicopter crash and the martyrdom of all six on board.

“I had the privilege of knowing Lt Gen Sarfraz Ali whom I found to be a thorough professional & an upright, honest human being,” PTI chief said while praising Lt Gen Sarfaraz Ali.

The PPP leader said that PPP workers and supporters’ hearts went out to the bereaved families of the helicopter victims.

The wreckage of the crashed helicopter was found near Musa Goth in the Lasbela district today, the Inter-Services Public Relations (ISPR) confirmed, a day after the aircraft had gone missing last night in southwest region.

A spokesperson for the Pakistan Armed Forces earlier today shared a tweet, saying that the wreckage of the unfortunate helicopter which was on flood relief ops was found in Musa Goth, Windar, Lasbela. It said that all six officers on board embraced martydom.

RAWALPINDI – The Pakistan Army helicopter that had gone missing Monday evening in Balochistan has crashed, ...

The spokesperson said that the chopper crashed “due to bad weather as per initial investigations”.

Many army personnel including several helicopters have been involved in flood relief operations in flood-hit districts of Balochistan for weeks now.