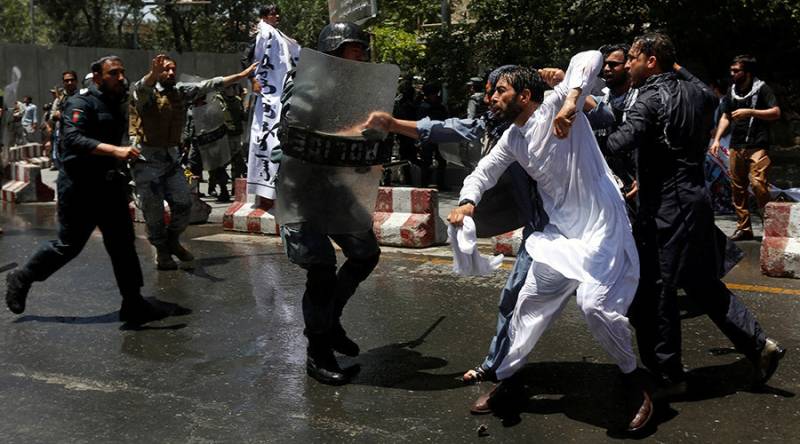 KABUL - Several protesters were reportedly killed and dozens of police injured when a rally in Kabul turned violent. The protesters had gathered to commemorate the victims of Wednesday’s devastating truck bombing and demand that top Afghan authorities step down.

More than 1,000 people gathered in downtown Kabul on Friday to mourn the victims of a massive truck bomb that killed 90 and injured more than 450 on Wednesday.

The protesters accused President Ashraf Ghani and Chief Executive Officer Abdullah Abdullah of failing to adequately deal with terrorism and demanded that they resign.

“The international community has to put pressure on them and force them to resign,” Reuters quoted one woman going to the Friday rally as saying. “They’re not capable of leading the country.”

The protest promptly turned violent, as a group of demonstrators tried to cross a cordon and began to throw projectiles at riot police, who responded by firing warning shots into the air. To prevent the protesters from reaching the Presidential Palace, police used tear gas and water cannon to disperse the crowds.

While some riot police officers were carrying only batons and shields, others were armed with assault rifles and even machineguns.

“Some of [the protesters] were beaten by police with sticks and some others detained,” a protester told AP. “This act of police and government proves that peaceful demonstration would not be useful anymore,” he said.